Why do some people on Ambien eat in their sleep? 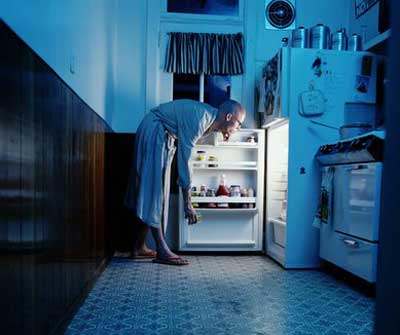 The sleeping pill Ambien causes some people to eat in their sleep with no recollection. See more sleep pictures.
Bryce Lankard/Getty Images

On any given night­, people are crawling out of bed and heading for their kitchens with unstoppable cravings. They aren't grabbing the usual late-night fare of pizza or leftover takeout. Instead, they are creating bizarre culinary concoctions like salt sandwiches and buttered cigarettes. What's the deal with these gourmands gone wrong?

Ambien is a commonly prescribed sleeping pill in the United States that has caught media attention for causing some users to eat in their sleep. ­

Sleeping and eating are two of our most basic needs, and they are closely related in our brains. The hormones that govern our appetite also influence our sleeping cycles. When you don't get enough sleep, it can disrupt these shared hormones, affecting your appetite. In addition, when we sleep, a chemical called leptin is released to suppress hunger to allow for extended snoozing. Although doctors aren't entirely sure why, zolpidem, the main chemical in Ambien, crisscrosses those sleeping and eating wires in a small percentage of Ambien users.

­These users can be hard to find because many don't know they are eating in their sleep. They are not conscious during their nocturnal noshing and don't remember it in the morning. Often, crumb trails or empty candy wrappers, depending on where their mindless foraging led them, are the only evidence of their nighttime adventures.

Who is eating those buttered cigarettes? And are they all on Ambien? Read on for the answers.

The following drugs also are linked to sleep eating.

Who is eating on Ambien?

Out of the millions of Ambien users, doctors estimate that sleep eaters number in the thousands. Affecting less than one out of every thousand people, sleep eating is a relatively rare side effect, says Sanofi-Aventis, the maker of Ambien [source: Downs]. Women, many of whom have major depression and may also take antidepressants, form the majority of these sleep eaters [source: Schenck].

What is the harm in a few people snacking in the wee hours? For one, they aren't snacking. They are devouring huge portions of high-calorie food, such as jars of peanut butter, bars of candy and entire loaves of bread. Even worse, people don't remember eating when they wake up, so the behavior can persist for a long time, potentially leading to excessive weight gain, hypertension and Type II diabetes. Sleep eaters also are in danger of eating something toxic while they unconsciously shovel food into their mouths, not to mention the risks of firing up the stove or wielding a kitchen knife while asleep.

Bedtime binging can happen without Ambien, too. At least 1 percent of the population likely experiences a sleep-related eating disorder (SRED) [source: Schenck], not all of whom take Ambien. This problem existed long before the pill came on the market in 1992. Research on people with SRED who did not take medication found related histories of sleepwalking, restless leg syndrome and other eating disorders, such as bulimia.

However, researchers have highlighted zolpidem as a potential stimulus for SRED in a small population of users. Zolpidem stimulates the GABA-one neurotransmitter, or chemical messenger, in the brain. This neurotransmitter directs certain cells to turn your brain off so you can sleep. For some people, in addition to flipping off their sleep switch, zolpidem turns on our natural urge to eat.

In studies when doctors switched people who had trouble with sleep eating to another pill, the SRED went away. Consequently, the U.S. Food and Drug Administration required all sleeping pill providers to add stronger warnings about the risks of sleep activity on their labels in 2006. Nevertheless, doctors still prescribe Ambien because, aside from the possible side effects, it makes people fall asleep [source: Silber]

If you are taking Ambien or another sleeping pill, doctors urge you to take it as prescribed. Don't mix it with any other depressants, such as alcohol or over-the-counter sleeping pills. Mixing the two can up your chances of walking or eating in your sleep. Take Ambien only when you're home and ready to fall asleep to avoid nodding off behind the wheel, at the sink or in the shower. As for warding off sleep eating after taking Ambien, if you wake up with salt and bread crumbs in your sheets and buttered cigarette butts by your side, you should probably see a doctor.

To learn more about what happens after you close your eyes, explore the links on the next page.

Eating isn't the only strange activity associated with Ambien. People have reported walking, talking, shopping and even driving while asleep. As you might guess, sleep driving has become a particular problem because of traffic accidents. According to one study, Ambien users are more than twice as likely as nonusers to have a car crash [source: Fox].