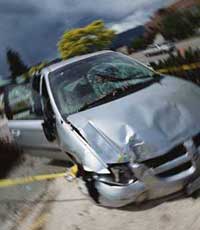 People involved in a serious car crash or victims of violent crimes sometimes cannot remember the incident. When amnesia follows an external traumatic event like this, doctors call it dissociative, or psychogenic, amnesia. This type of amnesia links outside events, such as marital problems or financial crises to the neurological reactions in the brain. Like neurological amnesia, dissociative amnesia alters the brain's ability to form new memories. Dissociative amnesia, however, is usually temporary.

Intense, prolonged stress can lead to dissociative amnesia because it activates our adrenal glands, which release cortisol and other hormones into the bloodstream. Cortisol in particular reduces the brain's plasticity, or ability to change shape to form new nerve pathways during memory formation. Extended exposure to cortisol can negatively affect the hippocampus [source: Canadian Institute of Neuroscience, Mental Health and Addiction]. It is harder to make memories with an impaired hippocampus, possibly producing dissociative amnesia at the climax of the stress.

For example, a woman walks into a hospital looking confused and acting as though she has completely lost her identity. In a few days, something triggers her memory. Maybe she sees something on the news about her hometown or hears her daughter's name in a conversation. From there, she quickly recalls who she is and recovers from the strange behavior.

Although very rare, that woman likely was suffering from global dissociative amnesia leading to a fugue state, or period of wandering. This type of amnesia, which deals with the loss of all autobiographical information and identity, is so severe because most patients have mental health problems that worsen the effects of the psychological trauma experienced. Often they have dealt with prolonged depression and former brain damage, as well as epileptic seizures or a head injury across a larger area of the brain. Therefore, the trauma can have a greater, more widespread impact on the brain.

Amnesia doesn't always wipe out your past. Sometimes it obliterates your future. Read on to find out how.

People who commit violent crimes commonly say that they don't remember what transpired. In a study of criminal offenders with life sentences, 29 percent claimed amnesia, and only 33 percent of that group remembered committing their crime three years after their conviction [source: Pyszora et al]. In many of these cases, a history of alcoholism and mental disorder existed, and the crime often occurred during a moment of extreme emotional frenzy or passion.