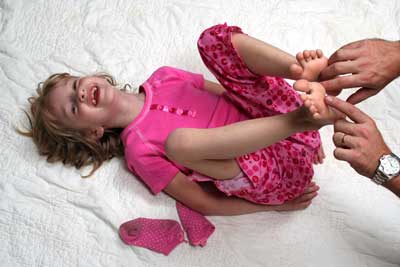 Superhero gifts come in all shapes and sizes, identifying their owners as someone apart. A girl on an episode of "Grey's Anatomy" thought she was a superhero because she felt no pain. You could kick her, pinch her, scrape her, burn her -- she wouldn't flinch. But she wasn't a superhero. She had a rare disorder called congenital insensitivity to pain.

You might think that not being able to feel pain would be a blessing. No tears, no painkillers, no lingering aches. But really, not being able to feel pain is dangerous. Pain tells you when you've pushed too far, when you're in a situation you need to get out of and when something is terribly wrong. If you step on a piece of glass or bang your head too hard, you know you need medical attention. But what if you never felt it?

People with congenital insensitivity to pain and CIPA have a severe loss of sensory perception. They can feel pressure, but not pain, so they are likely to injure or mutilate themselves without meaning to. They might know they slammed their hand in the door, it just doesn't hurt. This inability to feel physical pain does not extend to emotional pain -- people with CIPA feel emotional pain just like anyone else.

In this article, we'll discuss what CIPA is and what it's like to grow up with CIPA. We'll also talk about how people with CIPA cope with the disorder in their daily lives.

The nervous system determines the countless sensations we feel all over our bodies every day. How does this work? What causes your leg to feel tingly when it falls asleep? How do you know when you're about to sneeze? This activity from Discovery Channel explains how sensations are produced in the body.

Growing Up with CIPA 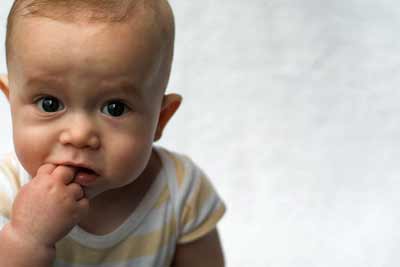 Children learn not to touch something hot the first time they get burned. They cry when they scrape their knees. But a child with congenital insensitivity to pain is different. Many parents discover their child has an insensitivity to pain when an accident happens that should make the child cry, but doesn't.

After parents notice all kinds of bumps and bruises that don't faze the child, they try to figure out what's wrong. Because congenital insensitivity to pain and CIPA are so rare, it might be difficult to get a diagnosis at first.

Teething is a big hurdle to overcome for children with congenital insensitivity to pain. Just like any teething baby, they want to gnaw on everything in sight. But because they don't feel pain, they don't know when to stop. They might chew through their tongues or bite their fingers until they bleed. Babies don't understand directions, so you can't just tell them not to bite so hard. Some parents find it makes sense to remove the child's teeth -- once the child's adult teeth grow in, he'll be old enough to understand when not to bite. But this removal of teeth can make eating more difficult. At a time when other children their age are learning to enjoy solid food, kids with CIPA are developmentally behind. Also, people with CIPA often don't feel hunger pains, so eating feels like an unnecessary chore.

Other very common injuries for children with CIPA are corneal abrasions and other serious eye injuries. These come from scratching or rubbing the eyes too hard. Some children have to wear protective eyewear or use special eye medicines.

The inability to sweat makes overheating a danger for people with CIPA.
© Photographer: Kameel4u | Agency: Dreamstime.com

Toilet training also tends to be difficult for children with CIPA or congenital insensitivity to pain. They have difficulty telling when they need to use the restroom and often suffer from constipation due to decreased intestinal motility, so toilet training can exceptionally difficult.

Fractures and other injuries can go unnoticed in someone with CIPA.
© Photographer: Robert Brown Agency: Dreamstime.com

­One of the biggest dangers for a child with CIPA is overheating. The "A" part of CIPA stands for anhidrosis -- the inability to sweat. Sweating is important -- it's a way for your body to regulate its temperature. When your body can't get rid of excess warmth, such as on a hot summer day or after exercise, it overheats. This can lead to febrile seizures (seizures brought on by fever or overheating) and even death in serious cases. A child with CIPA can break a leg and never notice. Fractures and burns are very common. A problem that's more difficult to deal with is joint deterioration. People with CIPA tend to overwork their joints. When you're sitting or sleeping and you're uncomfortable, you adjust your position to take stress off a certain area of your body. Someone with CIPA won't, and the extra wear and tear can cause swelling and serious injuries to the pelvis, knees and other joints. People with CIP­A often suffer from osteomyelitis, a bone infection that can result in reduced limb or joint function and even amputation.

As we saw earlier, CIPA is part of a group of disorders referred to as HSAN, disorders that result in trouble perceiving pain and temperature. CIPA, or HSAN Type IV, is one of the most severe. It's the only HSAN that causes the inability to sweat.

HSAN II, or congenital insensitivity to pain, is a lot like CIPA. People with HSAN II, which is also called congenital sensory neuropathy or CSN, suffer from the same kind of profound sensory loss, but they retain the ability to sweat.

CIPA is an autosomal recessive disorder. This means that for someone to get CIPA, he must receive a copy of the gene from both parents. Each of those parents must have a mutation on an autosomal chromosome, the chromosomes that aren't related to gender. Research indicates that a mutation on the TRKA (NTRK1) gene, which appears to control nerve growth, may be the culprit. There are no reliable statistics on how many people have CIPA at this time, but the condition is quite rare. It does not seem to affect one gender more than another.

So how does not feeling pain work? First, let's learn a little bit more about the nervous system. Your nervous system is made up of your brain, cranial nerves, spinal cord, spinal nerves, and other bodies, like ganglia and sensory receptors. Your nerves are what carry messages from your body to your spine, and your spine carries the messages to your brain. If you cut your finger, receptors in your finger send a message through the nerves to the brain that tells it "Ouch!"

Your peripheral nerves are important to feeling pain. They end in receptors that sense touch, pressure and temperature. Some of them end in nociceptors, which sense pain. Nociceptors send pain messages in electrical impulses along the peripheral nerves, which then travel through the spine and then to the brain. Nociceptor axons are usually unmyelinated, which means that they are slow. Myelin is an insulating sheath that forms around nerves and helps with impulse conduction -- the more myelin, the faster the message. The axons that carry the pain messages from the nociceptors can be either myelinated or unmyelinated, which means that pain messages can travel quickly or slowly. Which path the pain message takes depends on the type of pain -- severe pain travels on the fast path, while lesser pain travels more slowly.

This process doesn't happen for people with CIPA. Studies have found that nerve conduction in people with CIPA appears to be fine, so it's not that the message is getting lost. Some studies have shown a decrease or absence of nerve fibers -- both unmyelinated and myelinated. Without those nerve fibers, the body and brain cannot communicate. Pain messages don't make it to the brain because no one is sending them.

People with CIPA are also missing a nerve supply (innervation) in the epidermis and the eccrine sweat glands. There are two types of sweat glands: eccrine and apocrine. Eccrine sweat glands are all over your body and are used for body temperature regulation. Because there are no nerves in the skin and sweat glands, there is no way for the body and the brain to communicate with one another, resulting in anhidrosis. (You can get a more in-depth in-depth look in How Sweat Works.)

CIPA doesn't have a uniform clinical pattern. For example, most people with CIPA have some form of mental retardation -- but not all. In some patients it's serious, while in others it's very mild.

A Life Without Pain

Melody Gilbert's documentary "" follows three families with children with congenital insensitivity to pain. It's available from Netflix, or you can purchase it at the official site. 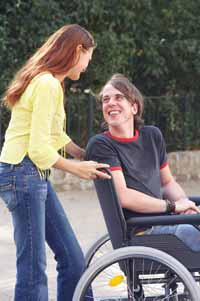 A wheelchair might be necessary as a result of deteriorating joints.
© Photographer: Franz Pfluegl Agency: Dreamstime.com

What's it like being a parent to a child with CIPA? Children with disabilities have special needs, and children with CIPA have very specific needs. Parents try to maintain a balance between being vigilant and trying not smother their kids by being overprotective. Parents with a child with CIPA might feel very isolated -- because it is such a rare disorder, most people don't understand what daily life involves. If there are other siblings, a parent might worry about the family revolving around one child and leaving the other out. Parents worry about their child being accepted by his peers, what his future will be like and what will happen to the child when the parents are no longer around.

CIPA doesn't have a cure, at least not yet. So instead, people with CIPA and their families have developed some adaptive strategies to help them in their daily lives. Each person with CIPA needs an individualized plan of care that helps with his own symptoms.

Parents might teach their child to get help when he sees blood.
© Photographer: Sasha Radosavljevic | Agency: Dreamstime.com

P­eople with CIPA and their families can benefit from being in contact with other families with the same issues. Gift of Pain is a Web site set up by the Gingras family, whose daughter Gabby has CIPA. HelpRoberto.com takes you inside the life of a young boy with CIPA. You can see video and photos and read a blog about Roberto's life.

As with any rare disease, the future for CIPA is in research. With luck and a lot of research funding, people with CIPA and other HSAN disorders might be able to go about their daily lives more easily. To learn more about CIPA and related topics, explore the links on the next page.