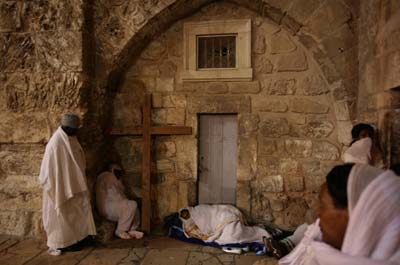 Samson is a Biblical character known for his superhuman strength -- the Hercules of the Old Testament. A middle-aged American decided that he himself was actually Samson. The modern-day strongman got an idea that part of the Western Wall needed to be moved. He spent time bodybuilding and came to Israel to move it. After a skirmish with authorities, he landed in a psychiatric hospital.

While at the hospital, one of the mental health professionals inadvisedly told the man that he was not, in fact, Samson. "Samson" smashed through a window and escaped the hospital. A nurse found him at a bus stop and praised his Samson-like strength, at which point he cooperated.

There's also the Virgin Mary, or a woman who thinks she's the Virgin Mary. Every day, she walks to the Church of the Holy Sepulchre, and every day she sobs at the altar of Golgotha, mourning the death of her son, Jesus. There's another Virgin Mary who invited everyone to her son Jesus' birthday party in Bethlehem. Israeli police come across multiple John the Baptists running around in animal skins, wanting to baptize people.

According to Dr. Yair Bar-El, these are the symptoms of Jerusalem Syndrome:

Tour guides in Jerusalem watch for these first two symptoms: Agitated, tense people who fall behind the group and want to go off alone should be observed carefully. Once they get to the bed sheet stage, there's no stopping them.

Traditionally, people slip prayers written on paper into the cracks of the Western Wall. You may have heard the Western Wall referred to as the "Wailing Wall." The Wailing Wall is a name bestowed by non-Jews, and some people say that it seems to make light of the people who come to the wall to pray. The preferred name is Western Wall.