The Reality of Jerusalem Syndrome 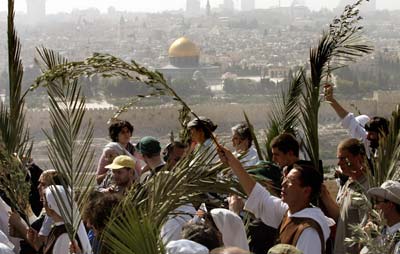 We've established that many people with Jerusalem Syndrome have a history of mental illness. For them, Jerusalem Syndrome is an extension of their illness. If you're already mentally ill, you might tend to fix your ideas on a certain subject. It could be UFOs, it could be conspiracy theories -- it might as well be Jerusalem and a return to purity. For these people, Jerusalem is a culturally and historically symbolic place to attach one's delusions and ideas to.

So we can conclude that in these cases, Jerusalem Syndrome is not a particular defined abnormality -- it's a symptom of a larger condition. But what about Jerusalem Syndrome proper, the disorder that occurs in people whose mental health is sound?

People with the syndrome proper generally aren't ranting and raving like mad people. They're anxious and even worried -- "What if I'm the Messiah?" "What if I am pregnant with the Messiah?" "What will I do?" They're polite. They describe their experience as being disorienting and somewhat like being intoxicated. They don't hallucinate. They know who they are ("I know I'm Joe Smith, but what if Joe Smith is the Messiah?"). They remember the details of their experience and are ashamed and reluctant to discuss them. They say that they felt something opening up within them [source: Bar-El].

Experts well-versed in Jerusalem Syndrome don't believe that it's a true psychosis. It's a reaction to a place, a reaction that comes from one's deepest self.

Eliezer Witztum, a professor of psychiatry, described this group of people as pilgrims instead of tourists. People on vacation are leaving their lives behind -- they move away from the center of themselves to a more remote place, both physically and emotionally. What we want when we go on vacation is to forget the things that anchor us. Pilgrims travel toward the center of their world, the core of it, instead of moving away from it. It's this nearness to the center of their lives, this deep well of meaning, that leads to an experience these people can't quite grasp. It's simply too much for them [source: Lee].

So does Jerusalem cause delusions? Not quite. You could say that the city is a catalyst for an intense reaction in people predisposed by their religious background to have such a reaction.

Of course, some doctors think that the idea of Jerusalem Syndrome as an actual clinically defined syndrome is hogwash. Admittedly, there are no good studies to prove the syndrome as such. People who supposedly had the syndrome proper are reluctant to fill out surveys and would generally prefer to go on living their lives as if the incident never happened. In other words, you're not likely to see Jerusalem Syndrome in the DSM-IV, the American Psychiatric Association's handbook of mental disorders, anytime soon.

Read on to find out how doctors treat Jerusalem Syndrome.

Some people say that another real-life example of Jerusalem Syndrome might be David Koresh, founder of the Branch Davidian cult involved in the Waco incident. It was only after his trip to Israel that Vernon Wayne Howell re-christened himself David Koresh, in honor of the Biblical King David, and began spouting his darkest prophecies of Armageddon. Some experts after the fact said that groups like Koresh's cult tend to be harmless unless they feel persecuted. One psychiatrist had suggested that the negotiators validate Koresh's delusions, much like hospital personnel do with people suffering from Jerusalem Syndrome [source: CrimeLibrary].