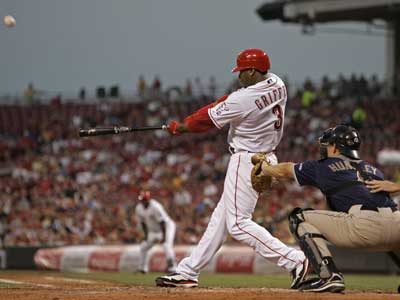 Was Ken Griffey Jr. merely blessed by Satan (also allegedly a lefty), or is there a scientific reason for his left-handed dominance at the plate? Read how baseball works.
AP Photo/Al Behrman

­As it turns out, there's no arguing with the lefties on the issue of left-handed dominance in sports. In athletic contests that involve competing one on one, such as boxing and tennis, they possess an advantage that has everything to do with surprise and nothing to do with witchcraft.

Obviously, left-handedness isn't a fate anyone chooses for themselves. Some researchers theorize that it can be triggered by birth or gestational trauma. Age also plays a role, as mothers over 40 are 128 percent more likely to give birth to a lefty than younger moms in their 20s [source: ABC News]. But humans aren't alone. Left-handedness or its equivalence occurs in a variety of different animal species and, interestingly enough, many experience some sort of lefty advantage as well.

As hilarious as the mental image may be, sea snails don't play basketball. Yet while these slimy little crawlers don't have hands, their left-leaning tendency manifests itself in the form of shells that coil counterclockwise, or left, as opposed to the more typical clockwise arrangement. Biologists have observed that lefty snails enjoy a distinct advantage against right-clawed predator crabs.

Many species of crab boast a special tool on the right claw to help them break through shells. Think of it as an evolutionary can opener. This adaptation helps the crab crack the more common clockwise-coiling snail shells, but falls awkwardly short against lefties. This variation in design renders the crab's weapon useless.

The crab-snail scenario applies throughout the animal kingdom. Predators adapt to hunt and feed on the majority. In the survival of the fittest, there's no payoff in being a picky eater. For instance, most fish species will favor a given direction and flee that way if threatened. The underwater equivalence of a lefty, however, would swim off in the other direction -- a move a predator wouldn't expect.

­Just as lefties often feel left out, minority-sided fish stand apart from their school. But while the­re's safety in numbers, nature shows us that there's also an advantage in standing boldly apart.