Is there a psychological reason for people being mean on the Internet? 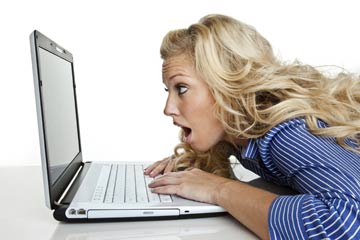 "I can't believe she wrote that!" Ever had that experience?
iStockphoto/Thinkstock

It's an accomplishment to reach Olympic-level competition. But when British diver Tom Daley didn't earn a medal at the 2012 Olympic games, he became the subject of Internet comments that were just plain mean. "You let your father down, you know that," tweeted a teen.

Daley retweeted the message, adding, "After giving it my all ... you get idiots sending me this." After sending more profanity-laced tweets to Daley and to others who criticized the teen, he was arrested by police but released hours later with a warning for harassment [source: Warstorne].

Whether it's Twitter, Facebook, message boards or chat rooms, the Internet seems to be a magnet for nasty comments -- and few result in real-world consequences. But why are people so mean on the Internet?

The root, it seems, may lie deep within the human psyche. The majority of communication is non-verbal, composed of body language, eye contact, speech tone and language patterns. Without this information to help us process and categorize information, our minds are left to sort through the uncertain. And, thanks to a leftover prehistoric penchant for fight or flight, being unsure about another person's intent often creates a negative reaction to a perceived threat [source: Gardner].

By continually presenting only our "best selves" online and reaping the emotional benefits of lots of "likes" on Facebook for instance, psychologists say our self-esteem may bloom disproportionately -- and negatively impact self-control. The result? You'll feel entitled to be an online meanie. Experts also posit that people sometimes actually forget that they're speaking out loud when they post a snarky comment -- writing something from a smartphone almost seems like you're talking only to yourself [source: Bernstein].

This lack of inhibition also may be connected to a physical distance from the people to whom comments are directed. Turns out, the closer physical proximity you have to someone, the less likely you are to be mean-spirited. For example, one recent study found game show contestants were less likely to vote off a contestant standing next to them than one standing further away [source: Dallas].

But here's an unexpected consequence: Lobbing snarky comments online -- even if no one knows your real identity -- could be bad for your health.

The Surprising Consequences of Being Mean on the Internet

But being mean in a virtual world can spill over into real life, resulting in an increase in aggressive communication with coworkers, family members and friends that later must be repaired. While being unkind online can temporarily boost self-esteem, it's a short-lived high. For lasting benefits, you'll need to form meaningful connections within a group.

Not to mention that having a negative outlook on life could actually shorten your lifespan. Case in point? One study discovered happy nuns lived nine years longer than their negative sisters [source: Chopra].

Yet, our brains are wired toward negativity, both to give it and to remember it. Back in the Stone Age, it was more important to remember to avoid the threatening tiger than to approach the friendly dog. If you have a tendency to be an online downer, changing your persona could be as simple as retraining your brain. If you can encourage positive thoughts in real life, you're more likely to be nice online, too. By recognizing the many good things that happen throughout the day, such as finishing a work project, completing household chores or keeping a date with the treadmill, you're retraining your brain. The more you cultivate positivity, the more active the left side of your brain's prefrontal cortex will be, and over time, this activity will help overshadow any negative emotions that may crop up [source: Rope].

Still, the Internet seems to attract comments that people wouldn't dare express publicly in real life, especially when it comes to hot topics such as sexual orientation, ethnicity or gun control [source: Kornblum]. So what should you do if your blog, Facebook page, Twitter handle or Internet conversations become the target of a meanie? We've got a few tried-and-true strategies to employ on the next page.

What To Do If You're a Target

Many online publications have begun requiring commenters to register and provide a valid e-mail address to put the brakes on trolls -- posters who intentionally comment using provocative or profanity-laced language to get a rise out of others. Whether it actually makes a difference is debatable [source: Ferenstein].

On a more personal level, what can you do to diffuse the online wars? One of the most effective strategies is to give yourself a time-out. Take a few minutes (or hours) to cool off before you reply. And when you do, remain objective. If it's on your personal blog or social media account, ask the person to stop. If that doesn't occur, then block the person from the service you are using and/or report them to the administrator of the message board or chat room, or even your Internet provider [source: Gardner].

If the threats seem likely to escalate and spill over into real life, make a police report. With the exception of Montana, in 2012 every state in the U.S. had a law against bullying behavior. However, only 16 of those states included an anti-cyberbullying provision. An additional five states were in the process of proposing laws against cyberbully behavior [source: Hinduja].

Of course, pursuing legal action is most effective if you haven't thrown any gasoline on the fire. Don't respond to negative comments with negativity of your own. It's important to preserve your online image, so don't stoop to the same level and fire back with a zinger. If you find it difficult to resist a retort, you always have the option of disabling comments or enabling a comment-approval feature [source: Robertson].

Of course, if someone is just responding rudely to a comment of yours on some random Web site, you always have the option to leave it alone. Is it worth the mental energy to even dignify it with a response? As with all interactions with difficult people, it helps to remember the source. People who are lashing out usually have troubles of their own and are simply looking to exert control or discomfort -- all in an effort to personally feel better.

In 2007, South Korea mandated that all Web sites with more than 100,000 users had to require them to enter their real names online, as well as input personal information at registration, all in an effort to reduce abusive comments. This law was later scrapped because negative comments had only declined by 0.9 percent in a year, and adding the personal info left people vulnerable to hacking [source: Chosun Libo].

Author's Note: Is there a psychological reason for people being mean on the Internet?

Not that I want to tempt fate, but I've witnessed only a few Internet flame-ups -- and they've all been from a comfortable distance. Well, comfortable may be an overstatement, since I tend to back away from discord among friends and colleagues rather than jump into the fray. Still, I doubt whether the assertions we make online would be as vehement if we were discussing the matter face-to-face at a cocktail party or post-meeting mingle. I love the convenience and speed of online communication, but there's something to be said for remembering manners, even when the topic is a difficult one.