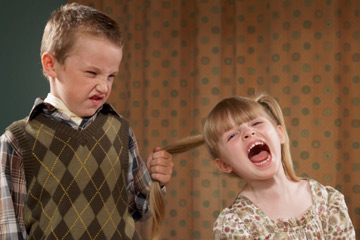 When you consider the great bullies that have graced the movie and television screen, most of them are males. In 2008, the Boston Globe compiled a list of the most intimidating pop culture bullies, and 12 out of 15 spots went to bad boys, including Bluto from "Popeye," Simon Cowell from "American Idol," Nelson from "The Simpsons" and Biff Tannen from "Back to the Future." Just three women represented their gender on the list: Nellie Olsen from "Little House on the Prairie," Regina George from "Mean Girls" and conservative commentator Ann Coulter.

Proportionately, this list seems about right -- in real life, bullies are far more likely to be male than female. In fact, if a screenwriter wanted to get a big laugh out of just how cowardly his male protagonist is, he might pit the youngster against a girl bully, albeit a big, burly one that hardly resembled a girl at all. As a culture, we tend to expect boys to throw the punches, verbal and physical. "American Idol" would be a much different experience if Paula was the mean one and Simon was the one who gushed over contestants.

For decades, researchers thought that boys were inherently more aggressive than girls, and playground scuffles usually ended with a boy in detention. In the 1990s, though, Finnish researcher Kaj Bjorkqvist began interviewing adolescent girls about their interactions. What he found is that girls are no less aggressive than boys; they're just aggressive in different ways [source: Talbot]. Instead of fighting on the playground like the boys, they play subtle mind games that may be even more damaging than a black eye.

For this reason, the Boston Globe's inclusion of Regina George makes perfect sense. 2004's "Mean Girls" was adapted from the book "Queen Bees and Wannabes: Helping Your Daughter Survive Cliques, Gossip, Boyfriends, and Other Realities of Adolescence" by Rosalind Wiseman. Regina George's dictates that her friends wear certain outfits on a given day of the week was based on a real high schooler's rules, and Regina's efforts to manipulate the girls in her orbit go on every day in the halls of high schools. So how do girls get to be such big bullies? 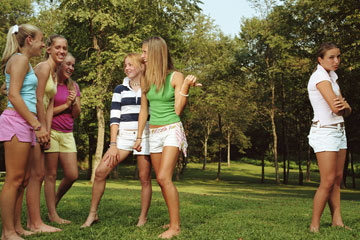 Up until the age of 4, kids tend to show aggression in the same way; they'll grab toys out of another kid's hands or push someone who makes them mad [source: Talbot]. But researchers at Brigham Young University have shown that girls as young as 4 have learned how to manipulate their peers to exclude kids and become the queen of the sandbox [source: Starr]. They'll tell lies and secrets to get other kids to shun the offender.

That means that before kindergarten, girls have started practicing relational aggression, a term that's been used to describe the type of bullying that's the specialty of adolescent girls. Rather than just bullying weak kids they hardly know, as male bullies do, female bullies go after their closest relationships. The female bully is hard to catch in action and difficult to punish; there is, after all, no bloody nose to serve as proof. Instead, victims carry emotional scars resulting from the bully's habits of spreading rumors, leaking secrets, savage put-downs, backstabbing and social exclusions. Bullies may demean a person's choice of clothing or exclude a friend from the guest list for a popular party in order to gain social status within a group of girls. At the same time, they send the victim into social exile, a particularly painful place for a young girl.

Boys also tend to bully others in order to gain social status, so it seems that bullies share certain motivations -- need for attention, fear of competition, anger at the way they're treated at home. And in the long-term, female bullies suffer as much as male bullies, because eventually, those closest to them tire of the manipulations, though there's a lack of research as to whether female bullies turn to drugs and alcohol and end up in jail at the same rates that male bullies do.

There are a few key differences, though: Male bullies come in all shapes and sizes, from the popular football captain to the social outcast, while female bullies tend to be the popular girls (another factor that may help them escape punishment). And while some male bullies appear to lash out because they haven't developed empathy for others, girls seem to possess ample amounts of empathy; so much so, in fact, that they know exactly how to harm a perceived threat. Because girls tend to put so much emphasis on friendships, female bullies know how to get a fellow female to divulge a secret, and then she knows how to reveal it in a way that will maximize the embarrassment for the victim.

During middle and high school, it may be important for parents to remind their daughters that true friends aren't manipulative, negative or mean. Such a warning may seem commonsense, but few things make sense in adolescence. Unfortunately, the high school cafeteria isn't the last place where a woman will go up against a female bully. 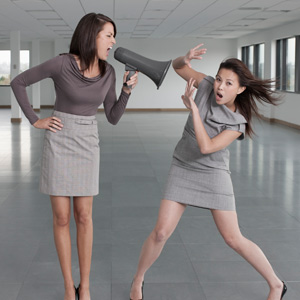