Why can't you tickle yourself? 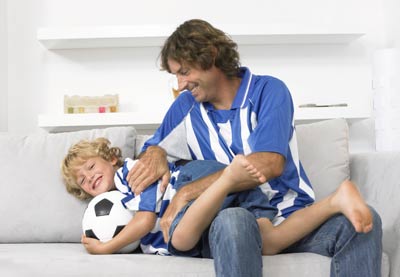 Most of us have a ticklish spot somewhere on our bodies, and it is usually pretty easy to find. For some it's just above the knee, for others it's the back of the neck, and some of us go into fits of laughter if someone grabs our sides. Laughing when another person tickles you is a natural reaction. Scientists have discovered that the feeling experienced when we are tickled causes us to panic and is a natural defense to little creepy crawlers like spiders and bugs. Slight tickles from insects can send a chill through your body letting you know something is crawling on you.

That same ticklish feeling sends us into a state of panic and elicits a response of uncontrollable laughter if a person tickles us. It's the moment that you least expect to be tickled and are that causes you to feel extremely uneasy and panicked, which leads to the most intense ticklish feeling. Even if you do know that you are about to be tickled, the fear and unease of someone touching and possibly hurting you causes you to laugh. Some people are so ticklish that they begin laughing even before they are touched.

So, if someone else's touch can tickle us, why can't we tickle ourselves? Much of the explanation for this question is still unknown, but research has shown that the brain is trained to know what to feel when a person moves or performs any function. We aren't aware of a lot of the sensations generated by our movements. For example, you probably don't pay much attention to your vocal cords when you speak. For the same reason, we can't tickle ourselves. If we grab our sides in an attempt to tickle ourselves, our brain anticipates this contact from the hands and prepares itself for it. By taking away the feeling of unease and panic, the body no longer responds the same as it would if someone else were to tickle us.

Although we are not able to tickle ourselves unassisted, there is a way to trick the brain by using a robot tickler. That's right. With all of the know-how of science and technology, a robot has been designed to allow people to tickle themselves. The same British scientists mentioned above have designed a machine that enables you to tickle yourself by remote control. To use the machine, a person lies on their back with their eyes shut. The robot is located near the person with a piece of soft foam attached to a plastic rod that is controlled by a remote control joystick. When the person activates the rod, the robot will react after a short delay. Even with delays as short as a fifth of a second from the time the person activates the rod until the robot tickled the person's hand, subjects have described the sensation as the same as another person tickling them. So, in a sense, you could tickle yourself with a robotic assistant.

To learn more about tickling, laughter and related topics, check out the links on the next page.

Do you have to be intelligent to be evil?
Why are humans altruistic?
Is laughter contagious?