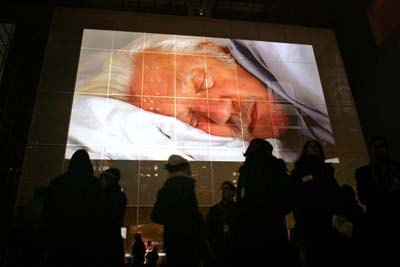 An image is projected onto the facade of the Museum of Modern Art during a public art project by artist Doug Aitken in New York City. "Sleepwalkers" explored how people experience memory and narrative in an urban environment.
Spencer Platt/Getty Images

You've probably seen sleepwalkers in the movies traveling down staircases with eyes shut and arms outstretched, but let's learn the facts.

The DSM-IV, a handbook for mental health professionals, defines sleepwalking by these criteria:

Now let's take a look at some of these criteria. During the first third of the night, your body is in NREM (non-REM) -- your deepest stage of sleep. NREM sleep is when you tend to toss and turn in bed. Your brain quiets down, which means that you aren't dreaming. So sleepwalkers aren't acting out their dreams. Think of it this way: In NREM sleep, your brain isn't very active, but your body is. In REM sleep, your brain is very active while your body isn't.

The brain is resistant to arousal during deep sleep, which explains why it's difficult to wake a sleepwalker. And if you do manage to wake one up, the sleepwalker is likely to exhibit signs of confusion for several minutes and have little to no memory of anything that happened.

Sleepwalking episodes can last from a few seconds to half an hour. Sleepwalkers usually have glassy-looking eyes and blank expressions on their faces. They might look awake but act clumsy. Sleepwalkers are capable of performing a variety of activities, from simply getting up and walking around the room to driving a car or playing an instrument.

Sleepwalking occurs most often in children, and more commonly in boys than in girls.
Sarma Ozols/Getty Images

Sleepwalkers are most often children. Lots more people than you realize have stories about sleepwalking when they were kids -- their parents found them wandering on the front lawn, or they walked down the street in their pajamas. Kids tend to grow out of it. The adult population of sleepwalkers is much smaller. Sleepwalking also runs in families, and occurs more often in boys than in girls.

So now to the million-dollar question: Why do some of us get up and walk around in the middle of the night?

Should you wake a sleepwalker?

The idea that you shouldn't wake a sleepwalker up is a myth, but it's probably also a bad idea to startle him or her. Sleepwalking can be dangerous -- a child could fall, or an adult could get in a car and try to drive somewhere. The best idea is to gently guide the sleepwalker back to bed. Most people only have one sleepwalking episode a night, so the person is unlikely to rise again [source: Chan].