Sleepwalking and the Arts 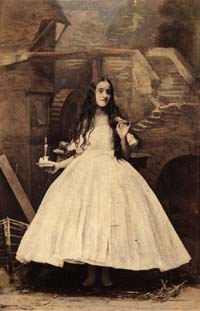 Sleepwalking is a popular phenomenon to depict within the arts, possibly because it's a way to explore boundaries and convey psychological elements. Shakespeare, for one, used a sleepwalking scene in "Macbeth" to expose a key element in Lady Macbeth's character development. Her ruthless ambition leads her to concoct a murder plot -- only it turns out that she doesn't have the stomach for it. Her gentlewoman brings a doctor to see Lady Macbeth as she walks the castle in her sleep, confessing her sins and attempting to wash the blood from her hands. Sleep takes away the mask she wears during the day and calls forth her confessions without her permission -- the sleeping body rebels against the waking mind.

In Bellini's opera "La Sonnambula," a sleepwalking incident leads to chaos. A sleepwalking woman is accused of being unfaithful to her husband when she innocently awakens in another man's room. In the opera, the other characters only believe the sleepwalker's story when they see her walking along a high bridge. They don't wake her because the shock might cause her to fall and perish. Her innocence is proven only by her proximity to danger. This is the sort of instance that maybe gave rise to the myth that waking a sleepwalker is harmful.

Legendary choreographer George Balanchine's ballet "La Sonnambula" uses some of Bellini's music, but changes the story. The ballet tells the tale of a poet who attends a baron's ball, meets a beautiful sleepwalker and is murdered by the host of the ball in a fit of jealousy. When the poet encounters the sleepwalker, he can't wake her. After he dies, his body is brought to her to hold. It's interesting to see a ballet that involves sleepwalking, the physical aspect of the sleepwalking is the most important. The ballerina dancing the part of the sleepwalker must perform a complicated pas de deux while making it clear to the audience that she's asleep. The element of sleepwalking adds an eerie, mystical feeling that enhances the darker undertones of the ballet.

A scene from the German silent film "The Cabinet of Dr. Caligari," directed by Robert Wiene
Hulton Archive/Getty Images

"The Cabinet of Dr. Caligari" is possibly the world's first horror movie, and its plot centers on the idea of a murdering sleepwalker controlled by an evil doctor. The film's German Expressionist style helps set the tone for madness and sinister forces, with dramatic shadows and warped-looking sets. In "Dracula," the vampire is finally able to sink his teeth into Lucy during a bout of sleepwalking.

In the arts, sleepwalking is linked to blood, danger and the occult, but most of all, loss of control. Sleepwalkers cede their fate to the hands of those around them. Part of the fascination with sleepwalking might be because it involves a state of transition, a person with his or her feet in two different spheres, straddling the border. Part of it is also fear -- what fantasies or dark deeds might you act in your sleep, unbeknownst to yourself? What if your body roams the night, but leaves its soul and mind behind? Sleepwalking has a zombie-like component to it.