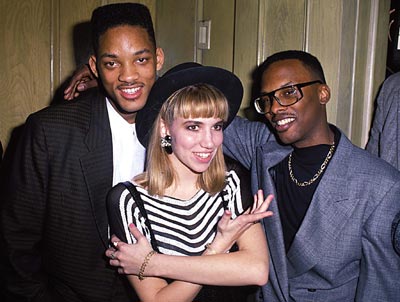 Electric Youth: These people understood what it was like to be a teenager in the 1980s. From left to right, the Fresh Prince Will Smith, Debbie Gibson and DJ Jazzy Jeff. See brain pictures.
Jeff Kravitz/FilmMagic/Getty Images

In 1988, hip-hop artists DJ Jazzy Jeff and the Fresh Prince sent out a message of solidarity and support to all teenagers who felt misunderstood. Over a hypnotic and funky beat, Will Smith reminded us that sometimes, parents just don't understand. The message, according to the duo, was universal to teens all over the land, and indeed, it might be hard for teenagers not to glimpse a little bit of themselves in the tragic tales the Fresh Prince told. Who, for example, hasn't felt the frustration of asking a parent for an awesome pair of shoes, only to end up with a low-class knockoff? And most kids have at least toyed with the idea of "borrowing" the family Porsche to impress the opposite sex.

As the Fresh Prince spins his heartbreaking tales of not being able to do what he wants, even if he knows that it might be a mistake, some adults in the crowd may be rolling their eyes. It's just not practical for teenagers to drop so much dough on a back-to-school wardrobe, and it's certainly not a good idea for unlicensed drivers to borrow a sports car, pick up a 12-year-old runaway and get stopped by the police, as the Fresh Prince did. No one wants to be the parent of a thug or a rebel without a cause. It's hard enough accepting that your child is an outcast member of the breakfast club.

Until recently, DJ Jazzy Jeff and the Fresh Prince could have also opined that scientists just don't understand either. Scientists have traditionally thought that a person's brain growth was complete and the structure was more or less fixed by the age of 3. Sure, connections between neurons were rewired as children went off to school and acquired information, but scientists believed the blueprint for the brain was set.

However, with the use of magnetic resonance imaging, or MRI, scientists have been able to look inside the brain, and it seems that changing voices, body hair and awkwardness around the opposite sex are not the only big changes occurring in the teenage years. The brain appears to undergo a growth spurt of its own, and this changing brain may in part explain why teenagers turn into a walking army of emotional loose cannons. On the next page, we'll take a look at just what's going on in the mysterious brain of a teenager.