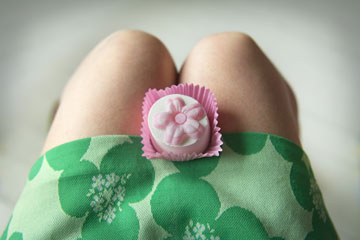 Oh cupcake, I know I must not eat thee, but ...
Mieke Dalle/Photographer's Choice RF/Getty Images

"The only way to get rid of a temptation is to yield to it. Resist it, and your soul grows sick with longing for the things it has forbidden to itself ..."

With these words, Oscar Wilde's "The Picture of Dorian Gray" captures the very essence of temptation. For what is temptation, but the thing we desire with every stitch of our being, yet attempt to deny with our meager self-control.

Temptations often fall to our base animal instincts. Just consider that tempting cupcake!

Humans love sweets. We evolved to gorge on energy-rich sugar whenever we could score it -- which worked out just fine back in our hunter-gatherer days [source: Lieberman]. See, sugar's rather scarce in the natural world, so our bodies do just fine with the occasional sugar binge. We digest it, store it in fat cells for later use and continue foraging through the bushes.

But there's always a balance to things. Our bodies want sugar constantly because we evolved to thrive in a world of scarcity. Children especially crave sweets to help fuel their rapid development [source: Kroen]. But now we live in a world of mass production and industrialized agriculture. Our "me want cookie" light still flashes 24/7, but now we have the means to have a cookie whenever we want it -- and in truly grotesque quantities.

Our natural instincts simply don't jibe with the world we've created. Think about temptations of the flesh: By the laws of evolution, a man who bonks every able-bodied woman in sight is simply fulfilling his biological mission to spread his genetic code. Yet you know him to be a philandering jerk, because his actions put him at odds with cultural standards of decency and public health.

To make matters worse, humans suck at weighing short-term rewards versus long-term rewards. Today's cupcake is sweeter than fitting into that swimsuit six months from now.

Therefore, it falls to each of us to either succumb to our deeply rooted temptations or to fight them with the one weapon we have against the world of sexy, sweet, short-term delights.