The Philosophy and Science of Willpower 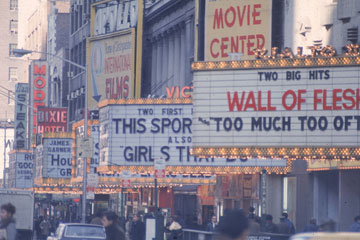 Back in 1967, New York City's 42nd Street offered quite the barrage of carnal temptations to passing pedestrians.
Hulton Archive/Getty Images

Like their ancient toga-wearing counterparts, modern philosophers continue to disagree on the nature of freewill. Do we really have any control over the choices we make and the things we desire, and if so, to what degree?

Theories of freewill vary, but the ancient words of Plato still line up with our modern perceptions of temptation and willpower. The revered Greek philosopher argued that the human experience is one of constant struggle between the intellect and the body, between rationality and desire. Along these lines, true freedom is only achievable when willpower unchains us from bodily, emotional, instinctual slavery.

You can find similar sentiments throughout world religions, most of which offer a particular and often difficult path to rise above our darker natures.

And science? Well, science mostly agrees with all of this. Willpower is all about overcoming your natural impulses to eat cupcakes, skip your morning workout, flirt with the waiter, hit the snooze alarm and check your e-mail during a funeral.

Your willpower, however, is limited. If life were a video game, you'd see a glowing "willpower" or "ego" meter at the top of the screen next to your "life" meter. Successfully resist one temptation, and the meter depletes a little. The next temptation depletes the "willpower" meter even more, until there's nothing left at all.

Our modern scientific understanding of willpower in large part stems from a 1996 research experiment involving chocolate and radishes. Psychologist Roy Baumeister led a study in which 67 test subjects were presented with tempting chocolate chip cookies and other chocolate-flavored treats before a persistence-testing puzzle. Here's the catch: The researchers asked some of the participants to abstain from sweets and snack on radishes instead.

Baumeister's results told a fascinating story. The test subjects who resisted the sweet stuff in favor of radishes performed poorly on the persistence test. They simply didn't have the willpower left to resist slacking off.

The resulting paper, "Ego Depletion: Is the Active Self a Limited Resource?" inspired more than a thousand additional studies discussing everything from the influence of positive messages to the ego-sapping power of daily decisions [source: Villarica].

Studies also show that cognitive capacity also affects our ability to hold out against temptation. Cognitive capacity is essentially your working memory, which you employ when resisting a temptation ... or holding a string of numbers in your head. A 1999 study from then University of Iowa professor Baba Shiv found that people tasked with remembering a two-digit number held out better than people remembering a seven-digit number when tempted with chocolate cake [source: Raskin]. The idea was that if you distract the brain with a more difficult task (memorizing seven instead of two digits), it would be harder for participants to also make a healthy food choice.

Cognitive load and ego depletion produce similar effects on human willpower. Luckily, as we'll discuss on the next page, there are ways to recharge.

Where does this epic war between temptation and willpower play out? Thanks to brain imaging technology, we have some strong clues. According to a 2009 Caltech study, test subjects choosing between sweets and health food both used a region of the brain called the ventromedial prefrontal cortex, located just behind the forehead. Those who held out against temptation, however, also fired up their dorsolateral prefrontal cortex, a small area located even further back. This doesn't necessarily mean we've found "the willpower nodule," but the dorsolateral prefrontal cortex does factor into working memory and goal completion [source: Goodier].