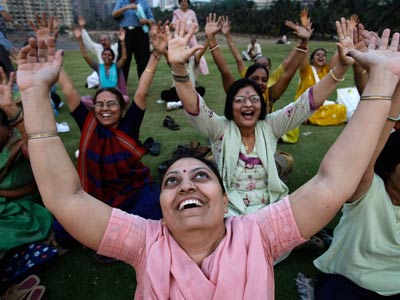 How does a laughter milkshake sound? What about a joy cocktail? Though the former may sound like a fast food kid's meal accompaniment and the latter like an urban professional's happy hour order, both are related to the practice of laughter yoga. To make a laughter milkshake, you pantomime mixing the ingredients of a milkshake together and drinking it, laughing all the while. Practice enough laughter exercises like making that milkshake, and proponents of laughter yoga say that your body will release a joy cocktail, which is a mix of hormones and chemicals that will keep your body in a state of health and happiness.

Whether or not you want to call it a joy cocktail, laughter may have some great benefits for the mind and body. It's believed that laughter improves circulation, stimulates the immune system, exercises muscles, reduces stress hormones and alleviates depression and anxiety [sources: Kanigel, Laughter Yoga International]. Laughter yoga is an easy way to incorporate laughter into your daily life, and it requires no special skill or athletic ability to practice. A typical session involves stretching, deep breathing and laughter exercises along the lines of making the milkshake.

Laughter yoga was developed in 1995 by Dr. Madan Kataria, who formulated the practice on the idea that our bodies can't tell the difference between real and fake laughter. Because both kinds of laughs produce the same beneficial results, it doesn't matter if a person has to fake a few laughs. There are still health benefits to be had, and the moves in Kataria's routine seem designed to get even a curmudgeon truly laughing before the end of the session.

That's because his laughter exercises are designed to get you out of your head and into your body. Adults tend to laugh because their mind finds something funny, but think of how children laugh -- they tend to laugh more for no reason at all, and not because their intellect was tickled by a late-night talk show host. In laughter yoga, however, you get back down to using your body to create laughter for no reason at all, by doing exercises with a group of people typically known as a laughter club. On the next page, we'll rewind in time to learn about the very first laughter club.