How does the brain create an uninterrupted view of the world? 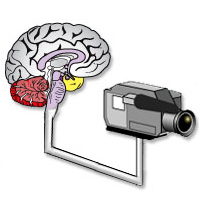 To achieve stability despite quick eye movements, the eyes take before and after shots of an image and compare them. Now, scientists may have finally discovered how. See more brain pictures.

If you've ever made your own movie using a camcorder, you've probably noticed that the picture can be pretty shaky as you move from one image to the next. In all but the steadiest hands, there's an unstable transition between one focused object and the next. But for most of us, our eyes -- the video cameras of our brain, if you will -- suffer no unstable transition as they move quickly over a scene. The world remains stable no matter how quickly or erratically we change our focus.

Scientists have known about and even understood this phenomenon for decades. To achieve a stable view despite quick eye movements, the eyes do an amazing thing: They take before and after shots of every focused image and compare them in order to confirm stability. That sounds a little complicated, but the process itself is pretty straightforward (and ingenious): Before your eyes actually sense an object, your brain takes its own picture of that object for comparison purposes. It knows where your eyes are going to move next, and it forms an image of the object that precedes our conscious, visual perception of it. Then, when our eyes do perceive that object in a sensory way (meaning we can see it), our brain has already laid the framework for a smooth transition. There's no shakiness and no instability. The brain has anticipated what our eyes are going to see, and it uses that anticipatory image for comparison to make sure the world has indeed remained stable in the split-second between the before shot and the after shot.

So the process is in the books. But scientists have spent at least 50 years trying to find out how the brain manages this feat. A study published in the online edition of the journal Nature offers insight into the mechanism that lets our brain see what our eyes are going to see before our eyes even see it. Scientists believe they have found a neural pathway that may explain the brain's anticipation of our eye movements. (Neurons are the message carriers in the brain. They form pathways that carry signals from one part of the brain to another.)

Before we can understand exactly how this process works, we need to know a little about the various parts of the brain. Read on to learn more.

Parts of the Brain

Before we get to the pathway itself, let's define a few of the major brain areas the study reports as being involved in conveying the information:

This data indicates what the eye is about to do next -- it's a copy of the signal the motor cortex is sending to the visual cortex to tell the eye to move. Neurons in the midbrain pass that information on to the thalamus, which sends the information to neurons in the visual cortex, telling them to shift their "perception window" to match the upcoming command. The new, unperceived image from the shifted window arrives at the somatic sensory cortex, where it is soon joined by the visual image perceived by that same shift a moment later. When the somatic sensory cortex interprets the visual signal coming in from the primary visual cortex, it compares it to the prior view of the same scene. As long as both views are the same, it interprets "stability" and simply filters out any shakiness in the transition from one visual image to another.

The study's authors expect this finding to lead to further understanding of other uninterrupted sensory transitions, such as the constant perception of sound that occurs even as you turn your head in different directions.

For more information on the brain and sensory perception, take a look at the links on the next page.

What is the definition of insanity?
Researchers Pinpoint Genetic Mutation in Chronic Night Owls
How can doctors use virtual reality to treat phobias?