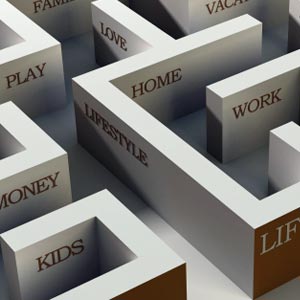 Which route will make you happiest?
©iStockphoto.com/mevans

Americans are proud to claim certain inalienable rights: life, liberty and the pursuit of happiness. It's interesting to note that the Founding Fathers, in all their wisdom, didn't claim happiness as a right, only its pursuit. Since those three concepts were linked in 1776, public health has improved and our freedom to live life as we see fit has increased. The pursuit of happiness continues, largely because the object of our pursuit is so much more elusive than life or liberty.

We all want happiness, but finding it isn't the easiest venture. Many of us conceive of it as the end-product of material wealth, career goals and family harmony. With that in mind, we seek out the things we believe will deliver it: better cars, nicer houses and bigger paychecks. Others of us work to put together a large network of friends or find a spouse.

When we're not happy with what we have, we believe we'll be happier when we get what we want. And we're right, we will be happier -- for a while. The problem is that once you get a large house with a swimming pool or get that promotion you've been chasing, you gradually get used to it. In fact, even when we're negatively affected by events, our immediate dissatisfaction also gradually fades, and in time we return to our pre-existing state of happiness (or unhappiness, whichever the case may be). Lottery winners and people who have been paralyzed report similar levels of happiness one year after the life-changing event. The initial change from the status quo produces short-term happiness or unhappiness, but as that becomes the day-to-day norm, happiness seems to level out [source: Wargo].

So what does make us happy? Is it a vibrant social life? Hearing the pitter-patter of little feet? Having a healthy lifestyle? Research has uncovered some surprising facts about what makes us happy, as well as the effect that happiness has on our lives.

Studies of twins, both fraternal and identical, indicate that about half of our happiness -- or the traits contributing to our happiness, such as an easygoing nature -- is genetic [source: BBC]. That means half of our ability to be happy is determined by external events or states, such as our careers or lifestyles.

That still gives us another half to work with, which means we can control our happiness much more than we might think. Our happiness is to a large degree dependent on how we react to or perceive outside events.

Our stress levels, as measured by the presence of cortisol and other stress hormones in our bodies, are in part regulated by our perception of whether or not negative circumstances will be bearable and the amount of hope we have that the situation will improve. While an occurrence such as losing one's job or home may seem catastrophic to one person, another person may view it more as a storm that must be weathered until it passes.

If the luck of the draw didn't give you the resilient personality you'd like, there are ways to enhance certain traits. Studies indicate that happiness can be "practiced" or enhanced through meditation, and that empathy and conscientiousness are also increased through this practice [source: National Institutes of Health].

As far as perceptions concerning our wants and desires, there have been some interesting findings. Want more of what you already have? You're going to be happier than the guy who wants less of what he has. If that's a puzzler, this won't be: People who don't have much of what they want aren't as happy as people who have lots of their desires met [source: Association for Psychological Science].

Speed-read Your Way to a Better Today

Researchers have found that the simple act of reading at a quickened pace increases feelings of happiness, self-confidence, energy and creativity. The result was the same even when test subjects read depressing material [source: Association for Psychological Science].

Extroversion has been linked to higher levels of happiness, but it's not clear which one causes the other [source: Matthews]. Do extroverts, flying on the wings of interaction, find happiness, or do these already happy Chatty Kathys just like to go out with their friends more?

We know that more happiness is derived from experiences than from material gain, which means that introverts may be in for an unhappy ride. If happiness is to be had in experience, extroverts are more likely than introverts to go out and seek new experiences. Extroverts may also have an advantage when it comes to getting ahead, partly because extroverts have a leg up on them when it comes to professional networking and exposure to new opportunities through friends and acquaintances. Social connections may also open up additional opportunities, such as increased proximity to possible romantic partners.

On the other hand, introverts aren't necessarily despairing for social connections, they just don't require a crowd of friends and acquaintances. While extroverts may despair at only having three or four phone numbers programmed into their cell phone, introverts prefer to have a small handful of close friends to satisfy the need for companionship and intimacy.

So, why would extroverts be happier? Happiness isn't necessarily found in social connections, but rather in not feeling socially disconnected. Social isolation occurs when we want more social interactions, but for one reason or another (chief among them being too introverted), we can't satisfy this need. Those who report feelings of social isolation are more likely to have higher levels of stress, poor sleep patterns, higher blood pressure and a host of other ill health effects [source: DiSalvo].

Interestingly, studies have shown that you can become happier just by faking extroversion, even if you are feeling withdrawn [source: Fleeson]. By forcing yourself to interact with others, especially strangers, you tend to project happiness and, in short order, feel happier. Even faking a smile produces increased happiness, as does merely being told that you will soon interact with a stranger [source: Bailly]. 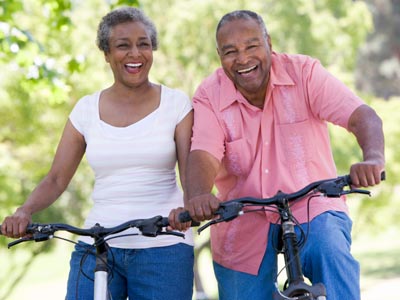 Is happiness all about the endorphins?
©iStockphoto.com/monkeybusinessimages

When it comes to health and happiness, either one can be the cause or effect. Research shows that when we feel happy, we're more likely to be healthy and stay healthy [source: University of Kansas]. The improving effect of happiness on health has been found in both industrialized and impoverished regions of the world. While being happy won't cure us of an ailment, it does have preventive qualities that are as important to our health as factors such as smoking, age and exercise [source: Center for the Advancement of Health].

Exercise has a positive effect on our body as well as our mental health. Exercise prompts the pituaritary gland to produce and release endorphins, neurotransmitters that bind themselves to opiate receptors in the brain, diminishing our perception of pain. Additionally, the presence of endorphins prompts our bodies to release additional sex hormones such as norepinephrine into our systems, which enhance our mood and sense of well-being.

The exercise doesn't need to be intense. Walking, for instance, increases your energy and improves your mood. Research shows that the number of steps we take each day directly affects our happiness, self-esteem and even conscientiousness about our health and diet [source: Gloady].

Intriguingly, although mental fatigue doesn't affect the functioning of the heart or muscles, our physical performance and endurance decrease when we begin working out following a period of mental exertion [source: American Physiological Society]. This may partly explain why we're less inclined to exercise when we feel stressed out or depressed, even though our emotional well-being would benefit from it.

And it's not just about exercise -- increased happiness may be just a sound night's sleep away. Poor sleep patterns have long been viewed as a product of poor mental health, but much like the two-way cause-and-effect street that links health and happiness, it seems that poor sleep may also be a strong contributing factor to depression and ADHD. In fact, sleep disorders -- and their effects on mood, cognitive ability, and behavior -- are often mistaken for other mental illnesses [source: Young].

Not enough happiness for you? We have more HowStuffWorks happiness article on the next page.