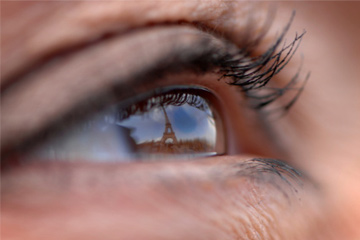 Ancient Greeks argued over whether light rays emanated from a person's eye or the object being viewed.
iStockphoto/Thinkstock

Over the centuries, our view of light has changed dramatically. The first real theories about light came from the ancient Greeks. Many of these theories sought to describe light as a ray -- a straight line moving from one point to another. Pythagoras, best known for the theorem of the right-angled triangle, proposed that vision resulted from light rays emerging from a person's eye and striking an object. Epicurus argued the opposite: Objects produce light rays, which then travel to the eye. Other Greek philosophers -- most notably Euclid and Ptolemy -- used ray diagrams quite successfully to show how light bounces off a smooth surface or bends as it passes from one transparent medium to another.

Arab scholars took these ideas and honed them even further, developing what is now known as geometrical optics -- applying geometrical methods to the optics of lenses, mirrors and prisms. The most famous practitioner of geometrical optics was Ibn al-Haytham, who lived in present-day Iraq between A.D. 965 and 1039. Ibn al-Haytham identified the optical components of the human eye and correctly described vision as a process involving light rays bouncing from an object to a person's eye. The Arab scientist also invented the pinhole camera, discovered the laws of refraction and studied a number of light-based phenomena, such as rainbows and eclipses.

By the 17th century, some prominent European scientists began to think differently about light. One key figure was the Dutch mathematician-astronomer Christiaan Huygens. In 1690, Huygens published his "Treatise on Light," in which he described the undulatory theory. In this theory, he speculated on the existence of some invisible medium -- an ether -- filling all empty space between objects. He further speculated that light forms when a luminous body causes a series of waves or vibrations in this ether. Those waves then advance forward until they encounter an object. If that object is an eye, the waves stimulate vision.

This stood as one of the earliest, and most eloquent, wave theories of light. Not everyone embraced it. Isaac Newton was one of those people. In 1704, Newton proposed a different take -- one describing light as corpuscles, or particles. After all, light travels in straight lines and bounces off a mirror much like a ball bouncing off a wall. No one had actually seen particles of light, but even now, it's easy to explain why that might be. The particles could be too small, or moving too fast, to be seen, or perhaps our eyes see right through them.

As it turns out, all of these theories are both right and wrong at once. And they're all useful in describing certain behaviors of light.