Bioluminescence: How Organisms Light Things Up 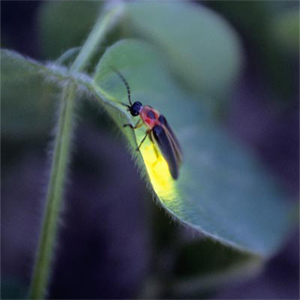 What else do you think of when you think of bioluminescence? Our friend the firefly of course. Here's Photinus pyralis posing on a soy bean plant.
Gail Shumway/Getty Images

Another way to make photons, known as chemiluminescence, involves chemical reactions. When these reactions occur in living organisms such as bacteria, fireflies, squid and deep-sea fishes, the process is known as bioluminescence. At least two chemicals are required to make light. Chemists use the generic term luciferin to describe the one producing the light. They use the term luciferase to describe the enzyme that drives, or catalyzes, the reaction.

The basic reaction follows a straightforward sequence. First, the luciferase catalyzes the oxidation of luciferin. In other words, luciferin combines chemically with oxygen to produce oxyluciferin. The reaction also produces light, usually in the blue or green region of the spectrum. Sometimes, the luciferin binds with a catalyzing protein and oxygen in a large structure known as a photoprotein. When an ion -- typically calcium -- is added to the photoprotein, it oxidizes the luciferin, resulting in light and inactive oxyluciferin.

In marine organisms, the blue light produced by bioluminescence is most helpful because the wavelength of the light, around 470 nanometers, transmits much farther in water. Also, most organisms don't have pigments in their visual organs that enable them to see longer (yellow, red) or shorter (indigo, ultraviolet) wavelengths. One exception can be found in the Malacosteid family of fishes, also known as loosejaws. These animals can both produce red light and detect it when other organisms can't.

Want to know more about how and why living things make light? Check out How Bioluminescence Works for a deep dive.

We'll heat things up next with incandescence.