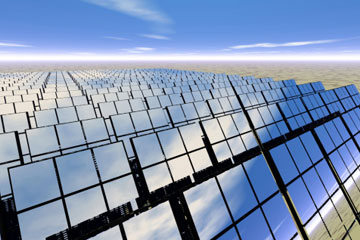 Solar panels take advantage of the photoelectric effect to power our homes and businesses.
iStockphoto/Thinkstock

Maxwell's theoretical treatment of electromagnetic radiation, including its description of light waves, was so elegant and predictive that many physicists in the 1890s thought that there was nothing more to say about light and how it worked. Then, on Dec. 14, 1900, Max Planck came along and introduced a stunningly simple, yet strangely unsettling, concept: that light must carry energy in discrete quantities. Those quantities, he proposed, must be units of the basic energy increment, hf, where h is a universal constant now known as Planck's constant and f is the frequency of the radiation.

Albert Einstein advanced Planck's theory in 1905 when he studied the photoelectric effect. First, he began by shining ultraviolet light on the surface of a metal. When he did this, he was able to detect electrons being emitted from the surface. This was Einstein's explanation: If the energy in light comes in bundles, then one can think of light as containing tiny lumps, or photons. When these photons strike a metal surface, they act like billiard balls, transferring their energy to electrons, which become dislodged from their "parent" atoms. Once freed, the electrons move along the metal or get ejected from the surface.

The particle theory of light had returned -- with a vengeance. Next, Niels Bohr applied Planck's ideas to refine the model of an atom. Earlier scientists had demonstrated that atoms consist of positively charged nuclei surrounded by electrons orbiting like planets, but they couldn't explain why electrons didn't simply spiral into the nucleus. In 1913, Bohr proposed that electrons exist in discrete orbits based on their energy. When an electron jumps from one orbit to a lower orbit, it gives off energy in the form of a photon.

The quantum theory of light -- the idea that light exists as tiny packets, or particles, called photons -- slowly began to emerge. Our understanding of the physical world would no longer be the same.