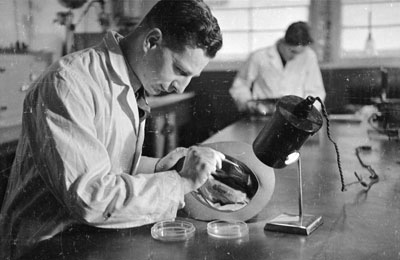 A scientist at Preston Forensic Science Laboratory removes a hair from a hat left at the scene of a shooting.
Kurt Hutton/Picture Post/Getty Images

Although Locard's exchange principle is generally understood as the phrase "with contact between two items, there will be an exchange," Edmond Locard never actually wrote down those words in the vast amount of material he produced, nor did he mention anything concerning a principle. Locard, however, did write the following:

"It is impossible for a criminal to act, especially considering the intensity of a crime, without leaving traces of this presence."

In other words, Locard believed that no matter where a criminal goes or what a criminal does, he will leave something at the scene of the crime. At the same time, he will also take something back with him. A criminal can leave all sorts of evidence, including fingerprints, footprints, hair, skin, blood, bodily fluids, pieces of clothing and more. By coming into contact with things at a crime scene, a criminal also takes part of that scene with him, whether it's dirt, hair or any other type of trace evidence.

Dr. Locard tested out this principle during many of his investigations. In 1912, for instance, a Frenchwoman named Marie Latelle was found dead in her parents' home. Her boyfriend at the time, Emile Gourbin, was questioned by police, but he claimed he had been playing cards with some friends the night of the murder. After the friends were questioned, Gourbin appeared to be telling the truth.

When Locard looked at the corpse, however, he was led to believe otherwise. He first examined Latelle's body and found clear evidence that she was strangled to death. He then scraped underneath Gourbin's fingernails for skin cell samples and later viewed the results underneath a microscope. Very soon, Locard noticed a pink dust among the samples, which he figured to be ladies makeup.

Although makeup was popular around the time of the murder, it was by no means mass produced, and this was reason enough for Locard to search a little further. He eventually located a chemist who developed a custom powder for Latelle, and a match was made. Gourbin confessed the murder -- he had tricked his friends into believing his alibi by setting the clock in the game room ahead. Locard's exchange principle had worked.

To learn more about the world of crime, forensic science and how to catch the bad guys, follow the links below.

When we're first introduced to the character of Sherlock Holmes in "A Study in Scarlet," Sir Arthur Conan Doyle's first published story of the famous detective, we find him in the chemical laboratory of a hospital. From the very start we can see Holmes is a medical man, someone who trusts very strongly the power of scientific fact. The stories of Doyle -- who attended the University of Edinburgh Medical School and ran his own medical practice before writing full time -- were a major influence on real life detective work and the art of criminal investigation. Edmond Locard himself was very familiar with the adventures of Sherlock Holmes, and he would even suggest his students read the mysteries for class.

Indeed, the philosophies of Doyle's character helped to form the core of Locard's principle. In the 1904 story "The Adventure of Black Peter," after a student reports a lack of footprints at a crime scene, Holmes responds: "As long as the criminal remains upon two legs so long must there be some indentation, some abrasion, some trifling displacement which can be detected by the scientific researcher" [source: University of Virginia Library].