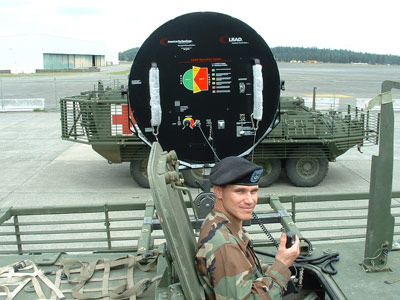 The back of the LRAD has handles so people can direct the majority of the sound it creates.
Photo courtesy American Technology Corp

On the previous page, we looked at how the LRAD creates lots of volume. So that's how the LRAD creates lots of volume. But the sound coming from the LRAD is also relatively directional. It doesn't disperse as much as sounds from typical speakers. People behind or next to the device still hear the sound, it isn't as loud. Even outside the beam, the sound can still be loud, so operators and nearby personnel often wear ear protection.

The LRAD uses the phase of the sound waves, the size of the device and the properties of air to create more directional sound:

The result is essentially a loudspeaker that can receive input from a microphone, a recording device or a Phraselator translation device. It can then amplify that input, allowing law enforcement, security and military personnel to give instructions and warnings or to clear buildings and disperse crowds. If those verbal instructions don't produce a result, the LRAD can produce a loud warning tone that approaches or passes the threshold of pain.

When used to cause pain or disorientation, the LRAD is a non-lethal weapon. Next, we'll look at the pros and cons of using LRAD in this manner.