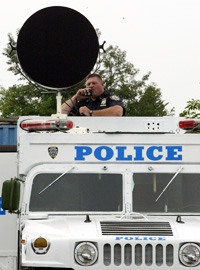 American Technology Corporation (now the LRAD corporation) developed the LRAD after the attack on the USS Cole in 2000. Its original purpose was to help enforce the safe zones around United States military vessels. Using the LRAD's default settings, a ship's crew can warn a craft that it is approaching a military ship and must change course. When used for communication, it's loud and clear but not usually painful. But if the craft doesn't change course, the ship's crew can override the LRAD's default settings. It can then produce a loud, irritating, potentially painful noise that acts as a deterrent. Ideally, the craft would then leave the area without the ship having to use lethal force.

Police and land-based military units have found uses for the LRAD. Using the same principles, authorities can give warnings and instructions that are audible to a large group of people. Law enforcement officials can use the devices to give instructions to large groups of people or order them to disperse, or to use loud sound levels to deter people from entering an area or warn them away.

However, human rights groups and hearing specialists alike have raised concerns about the LRAD. According to the National Institute on Deafness and Other Communication Disorders, any sound over 90 dB can damage a person's hearing [ref]. So the LRAD can threaten the hearing of anyone in its path, regardless of whether there is any wrongdoing, even when used only for communication.

Like stun guns, tear gas and less-lethal ammunition, LRAD can be used in crowd control and other situations as a non-lethal weapon. Non-lethal weapons are somewhat controversial. Human rights groups stress that even though they are less lethal, they are still weapons and have caused deaths in some circumstances. The LRAD in particular has drawn criticism since its effects can be permanent, and non-lethal weapons' effects are supposed to be temporary.

Finally, some people have questioned the LRAD's effectiveness, since wearing simple ear protection can render it useless.

Check out the next page for links with information about sound, the LRAD and other related topics.

Other Uses for Sound

Sound is useful for lots of things besides communication and music. Here are some examples: