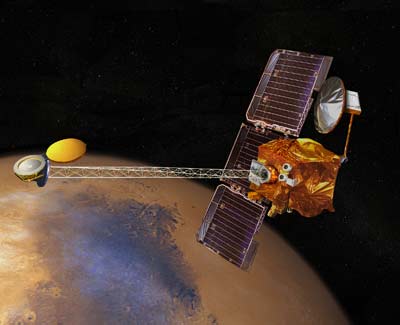 The Mars Odyssey spacecraft journeyed for more than six months before placing itself in orbit around the red planet in October, 2001.
AFP/Getty Images

The book and movie, "2001: A Space Odyssey," famously predicted that humans would have made great strides in exploring our solar system by the beginning of the 21st century. By 2001, Mars would have long been achieved, and we would already be flying manned missions to Jupiter. Of course, manned missions to Mars remain a very long-range goal, and Jupiter can only be reached in movies.

­However, NASA honored the impact that Arthur C. Clarke's book and Stanley Kubrick's movie have had by naming its 2001 mission 2001: Mars Odyssey. The Mars Odyssey spacecraft journeyed for more than six months before placing itself in orbit around the red planet in October, 2001. Its main objective was to scour the planet's surface to find out what the planet is made of and if there is any water or ice to be found there. There's still debate about whether water exists or ever existed on Mars. This is an important question, because if water does exist, it means that Mars might harbor life. It would also be very useful to astronauts who may one day go to Mars.

Mars continues to fascinate us, and NASA continues to move forward in its goal of sending a manned mission there within this century. In this article, we will look at this crucial step toward putting a person on Mars. You will learn how the Mars Odyssey spacecraft gets to Mars and how it examines and determines the elemental composition of the planet.