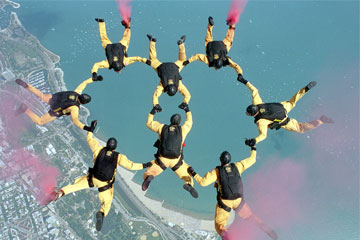 The thrilling roar of fighter jets performing a military flyover is now a common experience at many big spectacles or major sporting events, even at the opening of some Little League seasons. The military approves most of the 850 or so flyover requests submitted annually [source: Robbins].

The Army, Marine Corps, Navy and Air Force all participate in flyovers of one sort or another. Generally, these spectacles are arranged through the appropriate service's public affairs or community relations office.

The cost is deducted from funds used for training, but for some special services, like the Golden Knights skydiving team, the event organizer (if it's a private organization) may have to pay for lodging, meals and transportation -- up to $3,000 a day.

The military views flyovers as promotional and recruiting opportunities for the armed services. They allow ordinary citizens to see the military up close in a way that's normally not possible.

A flyover flight actually counts as training for the pilots, but with a flyover essentially consisting of a brief flight between two points, labeling it "training" could be viewed as rather generous.

In this article, we'll take a close look at how you request a flyover and what happens during a flyover, such as how the pilots manage to appear exactly when the national anthem is ending. We'll also examine incidents in which flyovers went wrong. 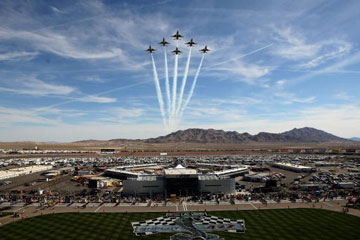 The Air Force defines a flyover as "one straight and level pass of one to four aircraft of the same type from the same military service and not involving aerobatics or aircraft demonstrations" [source: U.S. Air Force]. Sometimes the aircraft may turn around and execute another pass. The planes maintain an altitude of at least 1,000 feet (305 meters), a rule instituted after Sept. 11. But there aren't tricks or other maneuvers performed, so don't expect to see the Thunderbirds or a stunt team as part of a flyover.

A flyover isn't necessarily made up of fighter jets. Helicopters may be used, such as the UH-60 Black Hawk, or a large cargo plane like a C-17 Globemaster III. In fact, someone requesting a flyover can ask for any plane within the military's inventory, though it's not a guarantee that it will be available.

Flyovers have to be carefully timed, usually so that the fighter jets appear just as the national anthem finishes (during the "home of the brave" line). The calculations are all performed on a computer, using GPS coordinates and a target speed. Meanwhile, the planes are in a holding pattern near the event site. When a spotter positioned on the ground gives the command, the planes are off and soar over the event right on cue. The pilots may later appear at the event to be honored in person.

After the planes or helicopters go by, other associated activities may occur, like a parachute drop by the Army Golden Knights Parachute Team.

On the next page, we'll learn what happens when a flyover goes bad, taking a look at a couple of notorious incidents.

Besides the Super Bowl, you can count on seeing a flyover to open Fleet Week in New York, major air shows or the Army-Navy football game. 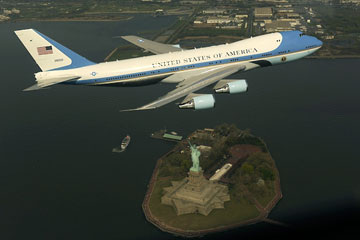 For more information about flyovers, military planes and other related topics, look over the links on the next page.