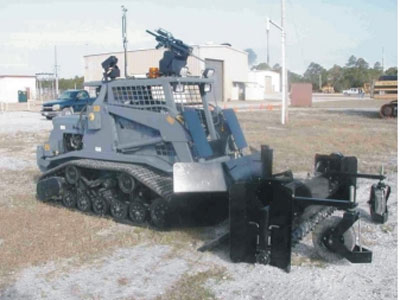 The All-Purpose Remote Transport System (ARTS) was developed by the U.S. Air Force for one purpose -- the help dispose of dangerous explosives. ARTS is basically a bulldozer, but instead of a bulldozer's blade, it has mine-clearing devices, a mechanical arm and a water cutting tool attached. ARTS can be remotely operated from a distance of up to 3 miles (5 km) with line of sight. It can also set charges to detonate explosives from a distance. ARTS weighs 7,500 lbs (3,400 kg).

The Robotic Armored Assault System (RAAS) and the Armed Robotic Vehicle (ARV) are both in development by the U.S. military. These are large-scale robots (ARV will weigh 5 to 6 tons) capable of carrying up to 1 ton of payload.

Potential weapons to be mounted on these tank-size robots include the 30mm Mk 44 chain gun or a turret system capable of firing Hellfire missiles. They have been designed so that they can be carried and deployed by the military's primary cargo-carrying aircraft, the C-130 and the CH-47.

In the next section, we'll meet some robots that can take to the air.

Although the robots in this article were designed primarily for use by military forces, they have civilian uses as well. Law enforcement agencies use robots to disarm or detonate explosives -- there's a good chance there's a robot on your local police force. Unmanned assault robots and scout robots can be useful in armed standoff situations.

Health and safety officials and fire departments are finding uses for these robots as well. Industrial fires can be deadly for firefighters because they can never be sure if there are explosive chemicals involved. Sending in a robot to check it out can save lives. The ability of robots to safely investigate and decontaminate hazardous materials might make them regular staff members at major hospitals and on Hazmat teams.