by Caitlin Uttley
NEXT PAGE 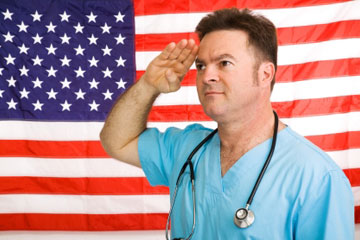 If you want to provide quality health care while giving back to your country, the Army Nurse Corps may be for you.
©iStockphoto.com/lisafx

In February 1943, the battles of World War II raged throughout Europe, North Africa, the Middle East and the Pacific. At the time, an American evacuation hospital near Bone (now Annaba), Algeria, was treating 150 patients when it received word that the German army had broken through the Kasserine Pass in nearby Tunisia and was heading northwest in the direction of the hospital. Upon hearing this news, the staff of the hospital packed up its patients and equipment and relocated to a new site 60 miles (97 kilometers) away. Within 12 hours of arriving at their new location, the hospital was up and running again, soon receiving an additional 500 patients [source: U.S. Army Center of Military History].

This story is just one of the many examples of the dedication and skill shown by the members of the United States Army Nurse Corps. Exemplifying their motto -- "Ready, Caring, Proud" -- Army nurses are part of a team of committed people working to care for the health and safety needs of the U.S. armed forces.

Whether they're on the front lines treating the battle wounds of fighting soldiers or stateside caring for veterans, soldiers and their families, or whether they're providing relief efforts after a natural disaster or participating in humanitarian work across the globe, Army nurses are a trusted and respected part of the U.S. military. In both war and peacetime, Army nurses continue to play a vital role in the support of the American military and civilian population. In 2011, the Army Nurse Corps celebrated its 110th anniversary.

So where did it all begin? And what is it like to be a nurse in the Army today? In this article, we'll take a look at the history of the Army Nurse Corps -- from its origin as a 100-woman support team to the well-trained and well-equipped medical officers of today -- and see what it takes to be an Army nurse in the modern military.

Think you have what it takes to be one of the military's medical elite? Keep reading to find out.