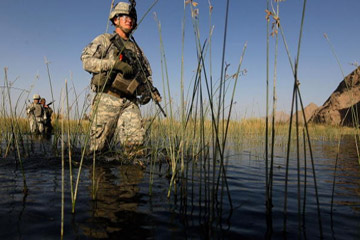 A lieutenant in the U.S. Army steps carefully to avoid bombs outside Kandahar, Afghanistan. Doing a job this delicate requires extensive training, mostly in the form of professional development courses provided by the Army.
Chris Hondros/Getty Images

Noncommissioned officers (NCOs) are known unofficially as "The Backbone of the U.S. Army." They are enlisted soldiers who have served long and well enough to be promoted to leadership positions over other soldiers. They are responsible for accomplishing their unit's assigned missions and for taking care of and training the soldiers under their leadership. They maintain the standards of the Army and provide help executing the orders of the commissioned officers above them.

Corporals, staff sergeants and sergeants are NCOs who live and work closely with their soldiers, acting as leaders of squads, sections and teams.

The history of the NCO Corps in the U.S. Army dates to the Revolutionary War, when Baron Friedrich Von Steuben standardized the ranks and responsibilities. The more senior soldiers in the NCO Corps attend mandatory professional development courses as they are promoted from one rank to the next. A Professional Development Ribbon recognizes their progress in the courses.

Keep reading to learn more about the Professional Development Ribbon and how NCOs earn them.

The Army's Non-Commissioned Officer Education System (NCOES) provides the courses that NCOs must complete before they advance to the next rank. The Professional Development Ribbon is awarded for completing the first school, the Warrior Leader Course. There is only one Professional Development Ribbon. It does not come with a medal. The ribbon, established in 1981, has vertical stripes in green and yellow, the colors of chevrons (V-shaped insignia) worn by NCOs, and blue, indicating support of the United States.

NCOs who complete higher-level courses are awarded numerals, 2 through 4, to pin on their Professional Development Ribbon. The numeral on a NCO's ribbon will indicate the highest level NCOES course completed. The highest is 4.

Late in 2009, the Army began overhauling its education system for enlisted soldiers. The changes included new, mandatory online Structured Self-Development courses (SSD) for all enlisted soldiers throughout their Army careers. NCOs must complete online SSD courses as prerequisites for attending Professional Development Courses. They're designed to be a bridge between practical experience and education. Changes also were made in the five Professional Development Courses for NCO advancement. Emphasis is more on education for leadership and self-confidence than on drills and specific training.

Some of the courses were renamed.

Here are the Professional Development Courses: