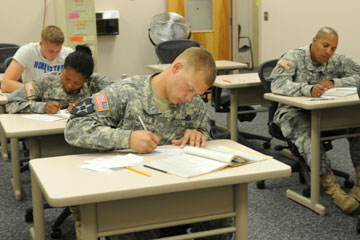 These students are taking the Test for Adult Basic Education, which will help improve their technical scores on the ASVAB.
SPC Alicia Torbush/U.S. Army

Want to join the service? One prerequisite for joining any branch of the U.S. military is a test called the Armed Services Vocational Aptitude Battery (ASVAB). The Army describes the ASVAB as a multiple-aptitude battery that measures developed abilities and helps predict future academic and occupational success in the military.

The test, maintained by the U.S. Department of Defense, is available at more than 14,000 schools nationwide and is taken by more than 1 million military applicants each year. American high-school students in their sophomore, junior or senior years are the most likely to take the ASVAB, but anyone who is eligible for enlistment may take it.

There are two parts to the ASVAB: One helps determine which types of positions will be the best fit for you and your skills, and the other is an aptitude test that determines whether or not you're eligible to enlist in the Army, Navy, Air Force or Marine Corps. The aptitude portion, known as the Armed Forces Qualification Test (AFQT), gauges word knowledge, paragraph comprehension, arithmetic reasoning and mathematics knowledge.

An AFQT score that's too low will prevent you from joining the military. Do well, though, and you may be offered enlistment incentives and bonuses.

The minimum AFQT score required to qualify for enlistment varies across the different branches of service. The book "ASVAB AFQT for Dummies" indicates that the following minimums are required for enlistment:

Don't worry too much if you score poorly on the test the first time -- you can take in again after waiting one calendar month. After the second test, if you want to take it a third time, you have to wait six months. Scores are valid for two years from the date of testing.

For more great Army info, check out the links on the next page.