Browse the article Did the moon doom the Titanic? 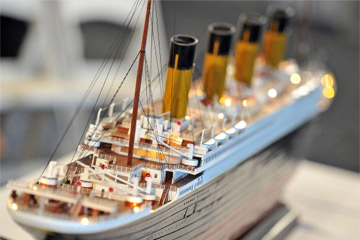 A scale model of what is perhaps the world's most famous sunken ship waits for a history buff to snap it up at the Titanic Auction preview.
Mike Coppola/Getty Images

It's a tale as old as crime and as cold as the heart of the sea: One dark and moonless night, an innocent young luxury liner wanders into a dangerous North Atlantic alley -- a known haunt of iceberg gangs. Heedless of warnings about this dangerous element, the ship hurries onward, possessed of that sense of invulnerability to which the young are prone.

On any other night, the White Star liner might have made it through unscathed, but tonight -- April 14, 1912 -- the icebergs are out in force, and the infamous, inevitable rendezvous with destiny occurs. The Titanic succumbs to its wounds within hours, leaving around 1,500 people to die in the icy waters on April 15, 1912.

Case closed -- or is it? What if the iceberg was just a patsy for a larger, celestial conspiracy? Who -- or what -- was ultimately to blame for the Titanic's tragic maiden voyage? Should we blame it on Rio? The rain? The bossa nova? Or was it an act of lunar-cy?

Armchair sleuths and industry experts have reopened the case countless times. Over the past century, researchers, authors and filmmakers have blamed the incident on everyone from White Star management and Belfast's Harland and Wolff shipyard to Captain E. J. Smith and helmsman Robert Hitchins. But there's a difference between proximate (close, direct) cause and ultimate cause. The proximate cause of the Titanic sinking? Filling with too much water. The ultimate cause? An iceberg opening holes in its side.

Ultimate causes tend to chain backward to other causes, and still others, inviting more questions along the way. What forces, for example, brought that iceberg to that particular stretch of sea at that fateful moment?

According to one hypothesis advanced by a team of astronomers from Texas State University-San Marcos, the iceberg might have been the button man, but our celestial companion was the one who ordered the hit. More than that, the moon had accomplices.

Granted, our nearest neighbor has an airtight alibi: It was roughly a quarter of a million miles away at the time. In fact, the Titanic sank on a moonless night. Why was the moon concealing its face? What did it have to hide?

It's time to crack this coldest of cold cases.

A side view of the Titanic's damaged compartments
©HowStuffWorks 2008

The sinking of the Titanic rides high in maritime history and popular legend. The trouble is, people have anchored the event to such a bewildering array of causes that we need to un-muddy the icy waters a bit before we dive into them.

First, the Titanic wasn't taken out by a long, deep gouge.

By design, a quarter of the Titanic's 16 bulkheads could flood without the ship sinking, so a wound along its length seemed the only explanation for how the flooding overtopped that critical number. Like Cheerios, the Titanic was thought unsinkable.

In actuality, the ship sank because the iceberg caused its hull to buckle -- likely because it was held together with second-rate rivets -- creating six narrow openings in the side. Water gushed in, unevenly filling five forward compartments at a rate of 7 tons per second [sources: The New York Times; Encyclopaedia Britannica]. Ultimately, the uneven strain rent the behemoth in half, and down it went.

For those who prefer their causes more esoteric, it's curious to note the mixture of good luck and bad that attended the Titanic tragedy. Fortuitously timed business affairs kept J.P. Morgan, the White Star line's owner, away from the maiden voyage of its proudest achievement (Thomas Andrews, who oversaw the ship's design, wasn't so fortunate). Equally poor timing inspired Captain E. J. Smith to choose the prestigious Southampton, England, to New York run as his final career voyage. His choice brought ill luck to his passengers as well, since it was his decision not to reduce speed despite iceberg warnings that arguably doomed the ship [source: Encyclopaedia Britannica].

Unluckily, the Leyland liner Californian, steaming less than 20 miles (32 kilometers) away that night, had no radio operator on duty when the Titanic's distress signals came through, but confusion or poor judgment, not ill fortune, prompted the captain to ignore Titanic's distress rockets [source: Encyclopaedia Britannica]. What souls survived in the icy waters 1 hour and 20 minutes later no doubt blessed their fortune when the Cunard liner Carpathia -- which had received their distress call as a result of a fluke -- arrived to fish them out of the cold, dark water [source: Cottam].

Speaking of luck, the Titanic nearly began its maiden voyage with another collision -- this time, with the docked ship New York, which the giant liner's suction pulled into its path while setting out [source: Encyclopaedia Britannica]. Would the collision have saved lives? And did the resulting delay cause the Titanic to occupy a different position than was scheduled, just when an iceberg lurked there as well?

As with any attempt to ascribe events to fate, we find ourselves foundering in ever-multiplying currents of causality. Before we abandon our present course, however, let's look at one last portent of ill fortune -- one with the power to exert tangible force: a bad moon rising.

There's nothing strange about encountering icebergs in the North Atlantic Ocean 400 miles (640 kilometers) south of Newfoundland. Upon receiving iceberg warnings from his wireless operator, Captain E. J. Smith is unlikely to have exclaimed, "Icebergs? What the deuce are they doing here?" After all, April through June is high season for floating ice in the region [source: Wallace].

Granted, more icebergs than usual prowled the seas that night. The question is, can we blame the moon for their abundance, or for placing a particular iceberg in the Titanic's path? Let's examine the evidence offered by Texas State's expert witnesses.

On Jan. 4, 1912, three months before the historic night, the moon made its closest approach to Earth in 1,400 years. Remarkably, this happened within six minutes of a spring tide, a semimonthly alignment of the sun and moon with Earth that maximizes their combined gravity and produces especially high tides and tidal currents. It also came one day after the Earth had reached its yearly perihelion, or closest approach to the sun. Truly, this was a recipe for a titanic tide.

Icebergs abounded that year. In fact, 1,000 of the frigid mountains -- about twice the average number -- wandered deep enough into traffic that shipping lanes had been moved south for the season [source: Wallace]. Even so, the glut of ice forced rescue ships en route to the Titanic to slow down. The abnormally strong spring tide might explain why.

Most icebergs in the North Atlantic calve off the Greenland ice sheet and travel south. Along the way, they tend to bottom out repeatedly in the shallow coastal waters off Labrador and Newfoundland. To break free, these stranded icebergs must either melt enough to float or wait for a high tide.

Beginning to catch the drift?

According to the Texas State group, the alignment-spawned high tide of January 1912 could have dislodged armadas of icebergs, many of which would have merged into the southbound ocean currents.

It's a fascinating idea, but does it hold water? Probably not. The moon may bear the brunt of popular blame for every kind of temporary madness, from crime spikes to love, but when it comes to the Titanic tragedy, the fault lies mainly with corner-cutting construction and a lead-footed captain.

After all, similarly large groups of icebergs were recorded in other years, which suggests that space shenanigans, while possibly contributing to the icy glut, were certainly not required for it. Moreover, iceberg strikes were nothing new; as many as 15-30 incidents had occurred in previous years [source: Wallace].

The risk was sufficient to inspire editorials railing against ever-faster Atlantic crossings, which, they argued, disregarded the known hazards of fog, derelicts and ice. What set the Titanic apart was not that the ship struck an iceberg, but rather that its sinking shocked the powerful into finally taking these Cassandras seriously [source: Wallace].

The Californian crew's confusion and its captain's fateful choices are well-traveled waters for Titanic aficionados. Why did the other ship's crew mistake the nearby Titanic for a smaller vessel? Why did they receive no answer from Titanic to Californian's Morse lamp signals?

In March 2012, British historian Tim Maltin offered an intriguing explanation straight out of David Copperfield's playbook: A thermal inversion, in which layers of cold air lie below layers of warmer air, caused light-bending effects great enough to explain both Californian mysteries. Maltin further argued that such miraging, which was recorded by several ships in the area, could have created a false horizon that hid Titanic's deadly iceberg until it was too late [source: Maltin].

Will we ever get over our morbid fascination with the Titanic? I hope not. It seems to me that morbid fascination -- with sinkings, disappearing airplanes, strange sightings -- has inspired more kids to go into careers in science and history than a thousand dry lectures. Give me "In Search of ... " any day.

That's why I find poking holes in pet theories, especially bizarre ones, a bit dispiriting. They make us feel connected to the mysterious, ineffable world that surrounds us as children, a realm that sadly shrinks as we grow older -- unless we're science geeks, in which case it expands exponentially. Pascal's triangle, in its own way, is as haunting and wondrous as the Bermuda Triangle.