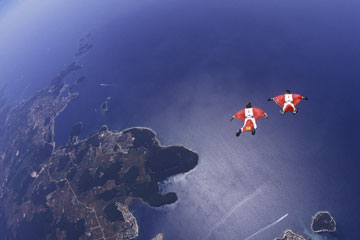 The Road Runner cartoons play fast and loose with gravity. Given the opportunity, Wile E. Coyote usually chases his quick-footed foe off the edge of a cliff -- but only plummets when he realizes he's running on thin air.

Needless to say, gravity doesn't work like this in real life. But what's going on when boulders or Acme anvils plummet to the Earth? Let's start with your feet and work our way up to, oh, the entire universe. Grab a chair, because this is going to take an entire page to explain.

Gravity holds your feet down to the ground because the mass of the planet exerts a gravitational pull on the mass of your body. In fact, gravity stirs up an attraction between any two objects in the universe: moons, dust motes, coyotes -- you name it. Wherever you find matter, you'll find gravity. You could never travel to a gravity-free planet, only one with greater or lesser mass resulting in greater or lesser gravity.

On a larger scale, gravity arranges cosmic bodies into orbits and even causes drifting space particles to pull together slowly into larger and larger clumps that eventually become planets, stars and galaxies. Back in the 1600s, Isaac Newton defined gravity as a universal force acting on all matter. According to his theory, the exact expression of gravity came down to mass and distance. The farther apart two particles are and the less massive they are, the less the gravitational force.

That's Newton's law of universal gravitation in a nutshell, and it stood unchallenged for three centuries. Then, in the 1900s, a wild-haired physicist by the name of Albert Einstein stepped in the ring and let fly with his general theory of relativity.

Einstein argued that gravity was far more than just a force; it was a curve in the fourth dimension of space and time. Given sufficient mass, an object can cause an otherwise straight beam of light to curve. Astronomers call this effect gravitational lensing, and it's one of the primary methods of detecting unobservable cosmic phenomena such as black holes. Similarly, the less gravity there is, the faster time passes, a phenomenon known as gravitational time dilation. For instance, a clock aboard an orbiting satellite advances slightly faster than a counterpart on Earth's surface.

While Einstein's theory brought gravity up to speed with modern science, we still don't know everything about gravity. Some scientists attribute gravity to hypothetical particles called gravitons, which -- in theory -- cause objects to be attracted to one another.

Finally, there's the field of quantum gravity, in which scientists attempt to reconcile general relativity with quantum theory. Quantum theory addresses how the universe works at the smallest subatomic levels. The field has helped scientists develop the standard model of particle physics, which details most of the inner workings of the universe -- with one notable exception. The standard model doesn't explain gravity.

So while quantum theory and relativity together explain most of the observable universe, they also contradict each other at times, such as in the study of black holes or the early universe. Not surprisingly, numerous scientists continue to work toward a unified theory.

Whatever theories we ultimately adopt, it's difficult to overstate the importance of gravity. It's the glue that holds the cosmos together, even if it still stirs up unanswered questions about the universe.

The effects of gravity
© 2010 HowStuffWorks.com

Scientists Identify Third-Largest Eruption in Earth’s History
Why Aren't We All on the Same Time Zone?
How England Broke off From Mainland Europe 450,000 Years Ago