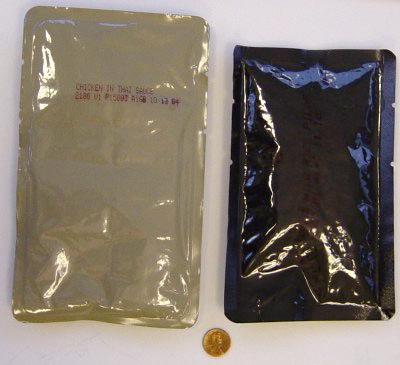 The MRE package is officially known as a tri-laminate retort pouch. The pouch is essentially a flexible can made out of thick aluminum foil and plastic layers.

Canning is an extremely common food preservation technology that has been in wide use for over a century. The basic idea behind canning, either in steel cans or in flexible pouches, is very simple. You boil the food in the can to kill all the bacteria and then seal the can (either before or while the food is boiling) to prevent any new bacteria from getting in. Since the food in the can is completely sterile, it does not spoil. Once you open the can, bacteria enter and begin attacking the food. This is why you have to "refrigerate the contents after opening" (you see that label on all sorts of food products -- it means that the contents are sterile until you open the container). See How Food Preservation Works for details on a wide variety of food preservation technologies.

We generally think of "cans" as being metal, but any sealable container can serve as a can. Glass jars, for example, can be boiled and sealed. Most people prefer refrigeration or freezing to canning because the act of boiling food in a can generally changes its taste and texture (as well as its nutritional content).

The pouch used to store an MRE is a sealable container. The pouch has three big advantages over a cylindrical metal can:

The flat shape also gives the pouch an advantage during processing. In the factory, the MRE pouch is filled with food, sealed and then boiled to sterilize the contents. Because an MRE pouch is flat, it takes much less time to heat the contents to the point of sterilization. That often means a better tasting product.

This article explains how StarKist's use of retort pouches to package tuna proved to be a great time saver. Michael Mullen, a Starkist executive, points out that the "most important advantage is that the product in the pouch is of a higher quality and better tasting [than tuna in the can] because of the process. With the [flat] pouch, we only have to retort it for 45 minutes, versus four hours in a can, to kill off bacteria." That makes a big difference both to the cost of production and the quality of the food.

Like normal canned foods, MRE meals have a finite shelf life. The shelf life is highly dependent on the storage temperature. For example, if stored at 100 degrees F (par for the course in a desert encampment tent), an MRE is only viable for a few months. Stored at room temperature, MREs last three years. Refrigerating an MRE could extend its life for many years.