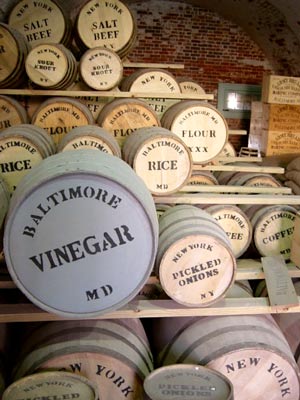 Nations have been fighting wars for centuries, and the food problem has always been a big one for armies on the move. Having looked at the food eaten by modern soldiers, it is fascinating to look back and see, for example, what soldiers ate during the Civil War.

At Fort Macon State Park on the coast of North Carolina there is a restored fort that served during the Spanish-American war and then the Civil War. The storeroom and kitchen are restored versions of the facilities as they would have appeared over a century ago.

As you can see, the primary unit of storage was the barrel. Meat was salted and stored, in salt, in barrels (the salt prevented bacteria from attacking the meat and preserved it). Flour, rice, coffee, etc. were stored dry in barrels. At the fort they could bake normal loaves of bread, but in the field soldiers ate hardtack -- incredibly hard, square biscuits shipped in boxes. Think of how hard a dog biscuit is and you have the general feeling of hardtack.

In the photo above, you may notice barrels labeled "sour kraut" and "pickled onions", and you may find that odd. These vegetable are anti-scorbutics -- that is, they contain vitamin C and therefore help prevent scurvy, which is caused by a lack of vitamin C. Scurvy was a big problem for soldiers and sailors for many centuries until artificial vitamin C pills became widely available.

A typical daily ration for a soldier stationed at Fort Macon during the civil war looked like this (source: park signage):

The 1861 Military Handbook and Soldiers Manual of Information has recipes that the cooks used to prepare meals for soldiers eating together in the fort. For example:

To Cook Salt Meat for Fifty Men - Put fifty pounds of meat in the boiler. Fill with water and let soak all night. Next morning wash the meat well. Fill with fresh water, and boil gently three hours and serve. Skim off the fat, which, when cold, is an excellent substitute for butter.

Soup for Fifty Men - Put in the boiler seven and one half gallons of water. Add to it fifty pounds of meat, the rations of preserved or fresh vegetables (about eight pounds of fresh vegetables; or four squares from a cake of preserved vegetables); a table-spoonful of pepper, if handy; ten small table-spoonfuls of salt. Simmer three hours, and serve. When rice is issued put it in when boiling. Three pounds will be sufficient. Skim off the fat, which, when cold, is an excellent substitute for butter.


Salt Pork with Mashed Peas for One Hundred Men - Put in two stoves fifty pounds of pork each; divide 22 pounds of peas in four pudding cloths, rather loosely tied, putting to boil at the same time as your pork; let all boil gently till done, say about two hours; take out the pudding cloth and peas; put all meat in one caldron; remove the liquor from the other pan, turning back the peas in it; add two tea-spoonfuls of pepper, a pound of fat, and with a wooden spatula smash the peas and serve both.

As you can see, military food preparation and menus have changed substantially since the Civil War.

For more information on MREs and a variety of military food topics, see the links in the following section.