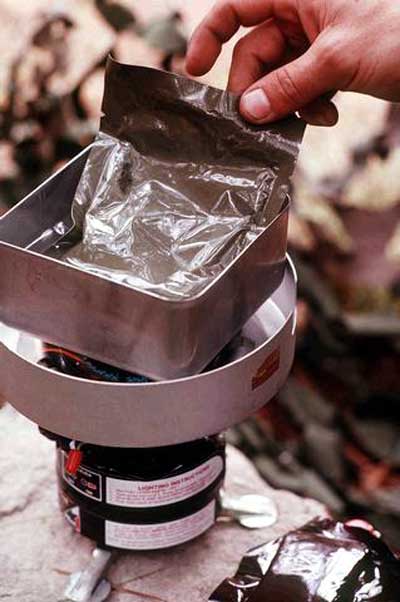 Heating an MRE on a field stove
Photo courtesy U.S. Department of Defense

Most human beings much prefer a warm meal to a cold one, especially if they're in cold or wet conditions. Eating cold spaghetti or cold beef stew is definitely no fun. A hot meal, on the other hand, can lift a soldier's spirits.

Because of the importance of a hot meal, all military MREs come packaged with a flameless heater. The flameless heater uses a simple chemical reaction to provide sufficient heat to warm the food.

Chemical heating is actually a pretty widespread natural phenomenon. Everyone has seen iron rust. Rust is a natural process in which iron atoms combine with oxygen atoms to create reddish, crumbly iron oxide. The process is normally very slow, but we all know that wet iron rusts faster. Iron exposed to salty ocean water rusts the fastest.

When iron turns to rust, the oxidation process generates heat. But rust forms so slowly that the heat generated is unnoticeable. We are all familiar with much faster oxidation reactions as well. For example, when you "oxidize" the carbon atoms in a charcoal briquette, they get quite hot. We use the word burning to describe this high-speed sort of oxidation.

The idea behind a flameless heater is to use the oxidation of a metal to generate heat. Magnesium metal works better than iron because it rusts much more quickly. To make a flameless heater, magnesium dust is mixed with salt and a little iron dust in a thin, flexible pad about the size of a playing card. To activate the heater, a soldier adds a little water. Within seconds the flameless heater reaches the boiling point and is bubbling and steaming. To heat the meal, the soldier simply inserts the heater and the MRE pouch back in the box that the pouch came in. Ten minutes later, dinner is served!