by Jennifer Horton
Prev NEXT
2 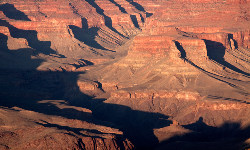 How big is the Grand Canyon? Really, really big. It's a signature testament to the diversity of climate found in the United States.
©iStockphoto

The third largest country in the world, the United States is perhaps best summed up by one word: diverse. Not only is it home to more immigrants than any other country, but it's also home to some of the world's largest canyons, longest rivers, deepest valleys and largest lakes [source: Ratha, National Geographic].

Composed of 50 individual states and the District of Columbia, the U.S. is home to every climate imaginable. You have your tropical beaches in Hawaii and Florida, arctic tundra in Alaska, arid deserts and prairies in the west, fertile plains in the heartland, humid forests in the east and everything in between. If you can't find a climate you like it's because you're not looking.

To make it easier, the country is divided into six regions based on climate and geography. Scattered among them you'll find the Grand Canyon, the mighty Mississippi River, the majestic Rocky Mountains and the Great Lakes. You'll also come across Death Valley 282 feet (86 meters) below sea level and Mt. McKinley 20,335 feet (6,198 meters) above, as well as the tropical rainforests of Hawaii, where 89 percent of the plants and 97 percent of the animals are found nowhere else on Earth [source: CIA World Factbook, National Geographic].

Another country with an amazing presentation of diversity is our next and final stop. Prepare to head to the south-western corner of the Polynesian triangle.