How does the Farmers' Almanac predict weather? 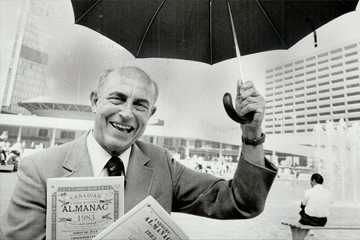 As anyone who's ever looked at a forecast can tell you, you can't predict the weather too far out. Just ask Punxsutawney Phil, the groundhog that everyone in the United States must blindly salute and take orders from every Feb. 2. All poor Phil has to do is tell us whether there will be six more weeks of winter -- which isn't really even much of a forecast -- and he still manages to get it wrong more than 60 percent of the time (although, to be fair, he is speaking in a complicated groundhogese dialect that a translator might have trouble interpreting) [source: Neuman Punxsutawney].

While major news organizations might cheerfully report a farmer's almanac prediction, their doing so shouldn't lend much weight to the claims. But before we thoroughly confuse you, let's get one thing straight: There is both a Farmers' Almanac and an Old Farmer's Almanac. While they clearly have strong contradictory feelings about apostrophe usage, they can agree on one thing: Weather forecasting should be secret science, emphasis way more on "secret" than "science."

Now let's get to the point: While they both claim to have a proprietary pattern that predicts the weather, that's different than actually predicting the weather. And although both claim great results (80 percent accuracy, in fact), meteorologists aren't buying it [source: Neuman]. And that really can't be too surprising, considering they're attempting to predict weather a year out -- if not more, due to publication deadlines. The National Oceanic and Atmospheric Administration's Climate Prediction Center, in fact, will only take a prediction out three months before acknowledging their predictions' lessened reliability [source: Palermo].

So you can't predict the future, or the weather. Predicting the future weather -- as both almanacs promise -- is a losing battle.