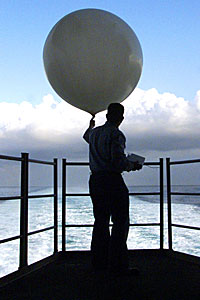 At an isolated weather station in the central United States, a technician emerges from a small brick shed grasping a balloon. It's not just any birthday party balloon, mind you, but a massive, white sphere more than 5 feet (1.5 meters) in diameter. Filled with more than 300 cubic feet (8.5 cubic meters) of helium gas, the enormous balloon tugs against the scientist's hand with a force of about four pounds. In the other hand, the scientist grasps a radiosonde, a lightweight cardboard box filled with scientific instruments that's tied to the bottom of the balloon. Striding out into an empty clearing, he gently releases the balloon and radiosonde.

As the balloon hurtles away from the Earth, the radiosonde is already hard at work, beaming atmospheric information back to data centers.

After an hour, the balloon has ascended to almost 100,000 feet (30,480 meters). This is the stratosphere, the second-to-last atmospheric layer before outer space. Below, the Earth's features are obscured by a thick layer of cloud. Above, the blue sky has faded to dark black. It's a beautiful sight, one only seen by a handful of astronauts and test pilots.

For the balloon, these breathtaking views will be its last moments. All throughout its ascent, the balloon has been expanding. It may have started out modestly, but now, at almost 18 miles (29 kilometers) high, the balloon has swelled to the size of a moving truck. Stretched to its limit, the balloon's thin synthetic rubber bursts and sends the tiny radiosonde plummeting back toward Earth. Within seconds, the wind catches a small, orange parachute and slows the device's descent. Hours later -- and hundreds of miles from where it first lifted off -- the weather balloon touches the ground.

Each day, hundreds of weather balloons around the world undertake this dramatic, near-space voyage. More than 70 years after scientists sent up the first experimental weather balloon, they remain the workhorses of modern meteorological forecasts. Whether it's a tornado warning or the weather report on the 6 o'clock news, weather balloons are what keep people on the ground tuned in to the meteorological workings of the upper atmosphere.

What kind of information does a weather balloon collect, and how does it accomplish this feat? Read on to find out.

In 1785, French balloonist Jean-Pierre Blanchard lifted off from Paris on a record-breaking journey across the English Channel. Tagging along for the ride was John Jeffries, an American physician known for dabbling in weather observation. In the skies above Northern Europe, Jeffries hoped to record some of the first-ever measurements of the upper atmosphere. When the balloon came dangerously close to crashing into the English Channel, however, Jeffries was forced to toss his equipment overboard to lighten the load.

It's nearly impossible to predict the weather without knowing the conditions of the upper atmosphere. It may be sunny and quiet at sea level, but at 18,000 feet (5,486 meters), a weak storm system could soon turn into something more dangerous. By sending up regular squadrons of balloons to measure the conditions of the upper atmosphere, meteorologists can keep tabs on brewing storms.

This information doesn't just keep joggers out of the rain -- it saves lives. High-altitude weather data is critical for predicting oncoming natural disasters like tornadoes, thunderstorms or flash floods. Thanks to weather balloons, officials can scramble supplies and emergency personnel to an affected area hours before a weather disaster strikes.

Like model rockets and remote-controlled airplanes, weather balloons have also entered the hobby market. In 2009, Massachusetts Institute of Technology scientists Oliver Yeh and Justin Lee used a weather balloon, a cooler, a cell phone and a digital camera to take a high altitude photograph of the Earth for less than $150.

Soon, other hobbyists were cobbling together their own near-space cameras. Of course, Yeh and Lee warn that launching things into the stratosphere can be dangerous [source: Project Icarus]. If it's not equipped with proper parachutes, an amateur weather balloon can become a deadly projectile if it falls in an urban area. The balloons could also provoke a disaster by getting sucked into the jet engines of a passing airliner. If you do start building your own high-altitude science project, make sure you follow all proper precautions.

Specially-designed high-altitude balloons also are used frequently by NASA to perform near-space experiments. During a meteor shower, a high-altitude balloon can collect cosmic dust emitted by the passing space rocks. Beach ball-sized "smart" balloons have been launched to keep tabs on weather conditions around NASA facilities prior to a rocket launch [source: Mullins]. NASA has even toyed with sending high-altitude balloons to probe the atmosphere around Mars.

We'll take a closer look at the components of a weather balloon on the next page.

Why let radiosondes have all the fun? In July 1982, truck driver Larry Walters tied 42 weather balloons to a lawn chair with the goal of flying out of Los Angeles, following the wind currents over the desert, and coming to rest safely in the Rocky Mountains. The balloons had more lifting power than Walters bargained for, however, and within minutes, his flying lawn chair had shot up to a chilly 16,000 feet (4,879 meters). Thankfully, Walters had an air gun aboard, and he was able to shoot out a few of the balloons, descending safely into a backyard in Long Beach, Calif.