Does a ring around the moon mean rain is coming soon? 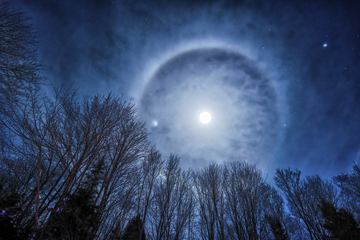 It's lovely, but it's not a guarantee of impending precipitation.
SHSPhotography/ThinkStock

Since the beginning of time, man has looked to the moon to answer some of life's most pressing questions: "Is tomorrow a good day to plant beans?" or "How much money does 'Seinfeld' make in syndication?" or "What's the spread on the Seahawks-Falcons game?" Oh, wait. That's Siri. We ask her that now. And it's probably a good thing we do, because the moon -- although mysterious and beautiful -- is as fickle as Shakespeare said. The only thing we can really count on the moon to tell us where we are on the lunar calendar. Which is great, but not exactly mind-blowing for those of us who receive a calendar from the bank every year.

So with all that being said, let's contradict ourselves. Because guess what? You totally might be able to tell if rain is coming if you see a ring around the moon. Of course, the emphasis is on "might" and not "totally." And what we're seeing isn't really a function of the moon "telling" us what the weather will be, but a more mundane atmospheric condition that just happens to be caught in the glowing light of the moon. Let's explore a little deeper here to see what's going on.

If you see a halo around the moon on a clear night, it could be an indication that bad weather is moving in. And it's not so much spooky foretelling, but rather pretty mundane science. While it may look like a ghostly ring, you're actually just seeing the light of the moon refracting (or bending) through ice crystals. These ice crystals make up cirrus clouds -- the wispy, ribbon-like ones that we find really high up in the sky. These cirrus clouds don't cause rain or storms, but here's the thing: They do precede some low-pressure systems by a day or two, and low-pressure systems do bring precipitation storms [source: Texas A&M].

In other words, seeing those icy clouds refracting light around the moon means cirrus clouds are present, which might indicate a coming storm. But it's not just the moon that can tell us such a thing; you can also see a solar halo as well, caused by the same cirrus cloud refraction and meaning the same thing [source: EarthSky]. Just don't be silly and try to stare at the sun to catch a ring. You won't be able to spot anything if you spend too much time gazing at the sun.

Why are the auroras seasonal?
10 Myths About Lightning
Earth's Early Atmosphere Was Briefly a Methane Haze