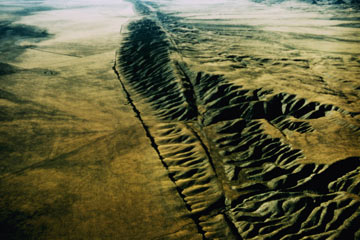 How does James Bond guess the other guy's hand in a high-stakes game of poker? He looks for a tell, of course. Maybe Bond's opponent twitches when he has a strong hand or tenses when he bluffs. Either way, an observable physical expression gives Bond a clue as to what his opponent has in store. By properly reading a tell, a poker player can minimize his or her losses.

Humans engage in very similar high-stake games with the planet itself. Meteorologists study the movements of the atmosphere to forecast the weather. If the atmosphere sends a tropical storm twisting toward a coastal city, meteorologists can raise the alarm and residents can prepare for a possible hurricane. Collectively, we read the tell and then do what we can to minimize our losses.

Earthquakes are a different matter. Scientists can make reasonably accurate long-term predictions when it comes to earthquake location. After all, roughly 80 percent of the world's major earthquakes occur along the Pacific Basin's Ring of Fire belt. Putting a precise time frame on quakes is a bit more complicated.

Seismologists often generate quake predictions based on an area's geological makeup and past seismic activity. Seismically active but geologically simple areas lend themselves well to the creation of reliable short-term predictions. Along the East Pacific Rise -- an underwater volcanic chain -- predictions frequently deal in time frames of approximately 1.5 years [source: Brody]. In other areas, however, quake predictions typically span decades and often prove decades off the mark.

The Earth offers no shortage of possible tells, ranging from seismic activity to changes in animal behavior, but our ability to interpret these signs remains imperfect at best. In the 1970s, for instance, researchers detected unusual ground leakages of radon gas prior to large quakes. Understandably, they thought this phenomenon might be a clear precursor. Further research disproved the theory. We read the seismic patterns, but at best we discern what chaos theorists refer to as irregular regularity [source: Burns].

Reading Between the Fault Lines to Predict Earthquakes

For instance, some scientists are moving away from the study of individual fault histories and are instead looking at the total, ongoing seismic activity in a given area. These studies are called long-term seismocasts.

Other researchers look to slow earthquakes, which are too weak to create seismic waves, but affect stress distribution beneath fault lines nonetheless. In recent years, studies have focused on the pre-quake electrical disturbances in the atmosphere and stress-induced changes in rocks.

NASA's QuakeSim project attempts to tackle the problem through the use of satellite-based measurements and cutting-edge computation. The researchers collect hundreds of thousands of measurements, entailing GPS data and high-precision geodesic radar images, in addition to traditional seismic data. Next, they feed the data into simulation programs that seek out patterns in the readings to create a worldwide map of earthquake hot spots. In addition to advancing our understanding of earthquake formation, QuakeSim has also demonstrated varying accuracy in predicting earthquake locations between 2000 and 2009 [source: NASA].

Other seismologists maintain that long-term forecasts are a better investment. Instead of seeking the Holy Grail of seismic research, they argue, we should devote that energy to improving the data that goes into building codes and insurance rates [source: Brody].

After all, reading an opponent's tells enables a poker player to take greater short term risks. When human lives are at stake instead of chips, it's difficult to rationalize that sort of strategy.

Explore the links on the next page to learn even more about Earth's mysteries.