Why do people buy up all the bread and milk before a storm hits? 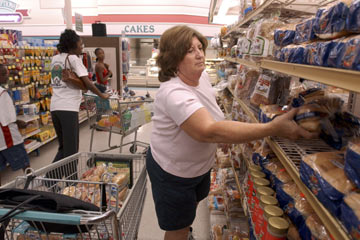 Shoppers stock up on bread before Hurrican Katrina. What is it about human nature that makes us reach for bread and milk before storms hit?
Barry Williams/Getty Images

During World War II, when food rationing became commonplace for U.S. civilians, there was always a 10-pound sack of sugar hidden at the back of my grandmother's clothes closet. She never divulged her reason for keeping it there, but her children always suspected she was afraid her stockpile would be discovered, which was a very real (although not entirely rational) fear.

The relationship between humans and food is seldom uncomplicated, and it doesn't always follow common sense -- especially when there's a storm on the horizon. Stopping by the grocery store to stock up on food is Storm Survival 101 for many people, and most of us have seen evidence of it: Shelves bare of staples like bread and milk. Although a shortage of these items, in general, is a rare occurrence in the U.S., it can happen when a super storm is in the forecast and local authorities advise constituents to buy extra supplies before the storm hits. Of course, on many levels this makes sense. If you're homebound because of the weather, you'll need something to eat when you don't have access to restaurant meals or local markets.

At issue, however, is a seemingly unavoidable urge to stock up on perishable items before a storm hits. If you're buying multiples of milk, yet fully expect your electricity to go out, there's probably an emotional rather than practical motivation at work.

And that's not the only conundrum people encounter when stocking up on milk, bread and other perishable items before a storm hits: They simply buy too much of a good thing. The universal truth about perishable items is that they have an expiration date. And if you buy them in abundance, you may not be able to consume them all before they expire. Most perishables, like milk and bread, will only last about a week. The same is true for some fresh fruits and vegetables. So if you're expecting to be homebound because of a storm for only a few days, why buy so much food that's sure to go bad?

The Psychology of Stockpiling

Rain, sleet or snow, there's milk in the refrigerator and bread in the basket. This may sound a bit like the delivery mantra of the U.S. mail service, but it's actually the tactic most Americans employ during severe weather. And this behavior offers clues as to the motivations driving them.

The compulsive desire to stockpile perishables isn't always based on logical behavior. "The thought to get milk before a storm is followed by the action or compulsion to go out and stockpile it. In one way or another, we spend a lot of time and energy trying to feel in control, and buying things you might throw out still gives the person a sense of control in an uncontrollable situation," says Lisa Brateman, a New York City-based psychotherapist.

"Buying perishables is like saying, 'the storm will be over soon and I won't be stuck in this situation for long,'" says Judy Rosenberg, Ph.D., a licensed clinical psychologist in private practice in Los Angeles.

The internal motivation for filling the refrigerator with perishable items may have another root as well. "We are all in the habit of buying perishables like milk and eggs," Rosenberg says, adding that few people easily change their routine, even though it no longer makes logical sense to follow the same course of action. "We all like the feeling of normal routine. Buying perishables and doing the 'normal routine' makes us feel safe and comfortable, even though circumstances are dangerous."

There's also the possibility that we hope to help others with our stockpile. These altruistic tendencies may cause us to have excess on hand, just in case others need it. "If we have plenty on hand and others didn't have time to shop, at least we can offer them food while they weather the storm," Rosenberg says.

So instead of buying bread and milk, what should we be doing? 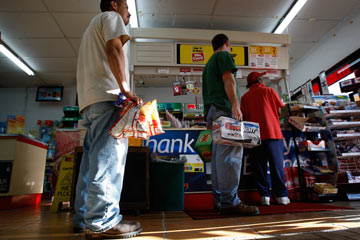 These Texas shoppers opt for beer and chips before Hurricane Ike. While that's more original than milk and bread, experts say you should go for canned goods and bottled water.
Scott Olson/Getty Images

"People always clear the shelves of milk, eggs and bread," Paul Shipman, a spokesman for the American Red Cross's Connecticut chapter told the Hartford Courant. "Well, the milk doesn't do well without refrigeration, eggs are useless if you can't cook them and the bread is not going to provide much nutrition on its own. You need non-perishable food, water and other necessities to be safe."

Along with buying bottled water, it's a good idea to assemble a non-perishable food emergency kit. Try peanut butter and crackers, for starters. Peanut butter is high in protein and good-for-you fats, and doesn't need refrigeration after you crack it open. Crackers, particularly the whole wheat variety, have a long shelf-life and will give you a fiber boost.

Buy multiples of canned meats, such as chicken, tuna or salmon, and canned vegetables and soups, all of which can last a couple of years. Make sure you have a manual, not electric, can opener stored with them.

You'll also want to keep snacks on hand, like nuts and trail mixes. Calorie for calorie, they pack a big nutritional punch, as do dried fruits, which are high in vitamins and fiber. Add a few granola bars to the mix because they can give an energy boost. You could also keep powdered milk instead of fresh milk on hand; the powdered variety still offers calcium and vitamin D, but lasts much longer [source: Cartwright].

If you do stock up on perishables, be smart about it. Some fruits, like apples, can last up to three months. Others, like oranges and grapefruits, can last for a couple of weeks. Even less hardy treats, like avocados or tomatoes, can last for at least a week if you purchase them before they ripen [source: DiMaggio].

Author's Note: Why do people buy up all the bread and milk before a storm hits?

Not only did I grow up in the Midwest, but on a farm miles and miles from the nearest town. Thus began a habit I've kept well into adulthood: stocking up for storm season. Even though I now live less than two miles from the nearest market, my pantry is never without a bevy of staples (basically any ingredient I would need to bake a cake or serve a protein-carb-vegetable dinner). It's a system my husband, who has always lived in a city, cannot quite fathom. Still, when warm chocolate chip cookies seem to magically appear from the oven on a snowy day, I'm pretty sure he's willing to adapt -- at least temporarily.

What if a wildfire came near my house?
How (and Why) Hurricanes Get Their Names
Sun's Twisted Magnetism Can Create Wonky Auroras