When a Tsunami Makes Landfall 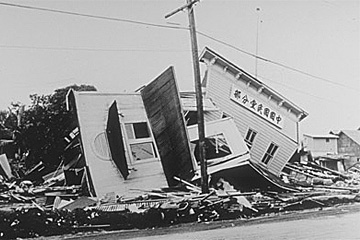 When a tsunami reaches land, it hits shallower water. The shallow water and coastal land acts to compress the energy traveling through the water. And the terrible transformation of the tsunami begins.

The topography of the seafloor and shape of the shore affects the tsunami's appearance and behavior. In addition, as the velocity of the wave diminishes, the wave height increases considerably. This compressed energy forces the water upward.

A typical tsunami approaching land will slow down to speeds around 30 miles (50 kilometers) per hour, and the wave heights can reach up to 100 feet (30 meters) above sea level. As the wave heights increase during this process, the wavelengths shorten considerably. Imagine squeezing an accordion and you get the general idea.

A witness on the beach will see a noticeable rise and fall of beach water when a tsunami is imminent. Sometimes, the coastal water will drain away completely as the tsunami approaches. This stunning sight is followed by the actual trough of the tsunami reaching shore.

Contrary to what you may have seen in Hollywood disaster films, tsunamis usually arrive as a series of swift, powerful floods of water, not as a single, enormous wave. However, a large vertical wave called a bore may come with a churning front. Rapid floods of water often follow bores, making them particularly destructive. Other waves can follow anywhere from five to 90 minutes after the initial strike. The tsunami wave train, after traveling as a series of waves over a long distance, crashes into the shore.

Tsunamis typically result in staggering body counts. This is especially true when they strike without warning. Tsunamis can level development and strip away coastlines, pulling everything in their path out to sea.

The areas of greatest risk during a tsunami strike are within 1 mile (1.6 kilometers) of the shoreline, due to the flooding and scattered debris, and less than 50 feet (15 meters) above sea level, due to the height of the striking waves.

A tsunami can even affect sheltered areas if varying land features and the underlying seascape line up just right. For instance, a protected bay area with a narrow inlet can give a tsunami a "funnel" to travel through, amplifying the destructive power of the waves. River channels can also provide room for a tsunami bore to rush through and flood vast tracts of land.

Until a tsunami strikes, it's difficult to predict how it will interact with the features of the affected land. The wraparound effect occurs along island coastlines when multiple wave strikes hit different areas of surrounding land, resulting in different degrees of flooding. Harbor resonance is a chaotic and highly destructive tsunami side effect created when waves continuously reflect and bounce off the edges of a harbor or bay. Harbor resonance can cause the amplification of circulating wave heights and even increase the duration of the wave activity within the area.