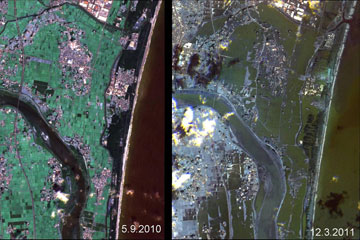 These images show the effects of the tsunami on Japan's coastline. The image on the left was taken on Sept. 5, 2010; the image on the right was taken on March 12, 2011, one day after an earthquake and resulting tsunami struck the island nation.
Image courtesy NASA/German Aerospace Center/Rapid Eye

Scientists are constantly trying to learn new ways to predict the behavior of tsunamis. Given current technology however, most tsunami data come to us after the damage has already occurred.

In a post-tsunami survey, geologists measure a number of factors. Scientists are particularly interested in the inundation and run-up features after the waves strike land. Inundation is the maximum horizontal distance penetrated inland. Run-up refers to the maximum vertical distance above sea level that the waves reached. Inundation and run-up are often determined by measuring the distance of killed vegetation, scattered debris along the land and eyewitness accounts of the incident.

Scientists have made great strides in monitoring and predicting the ongoing threat of tsunamis. One center continuously monitoring seismic events and changes in the tide level is the Pacific Tsunami Warning Center (PTWC). The center is located in Ewa Beach, Hawaii, and services the Hawaiian Islands and surrounding U.S. territories by working in conjunction with other regional centers. The West Coast & Alaska Tsunami Warning Center (ATWC) in Palmer, Alaska, serves the Aleutian Islands area along with British Columbia, Washington state, Oregon and California. This center is of particular importance because submarine earthquakes in this region have created waves that moved throughout the Pacific Ocean before striking elsewhere.

Tsunamis are detected by open-ocean buoys and coastal tide gauges, which report information to stations within the region. Tide stations measure minute changes in sea level, and seismograph stations record earthquake activity. A tsunami watch goes into effect if a center detects an earthquake of magnitude 7.5 or higher. Civil defense agencies are then notified, and data from tidal gauge stations are closely monitored. If a threatening tsunami passes through and sets off the gauge stations, a tsunami warning issues to all potentially affected areas. Evacuation procedures in these areas are then implemented.

The Deep-Ocean Assessment and Reporting of Tsunamis (DART) uses unique pressure recorders that sit on the ocean bottom. These recorders are used to detect slight changes in the overlying water pressure. The DART system can detect a tsunami as small as a centimeter high above the sea level.

NASA is also heavily involved in the quest to predict deadly tsunamis before the occur. In 2010, researchers at NASA's Jet Propulsion Laboratory successfully demonstrated elements of a prototype tsunami prediction system. Using real-time data from the agency's Global Differential GPS (GDGPS) network, the system successfully predicted the size of the tsunami following the Feb. 27, 2010, Chilean earthquake. In the future, such a system may enable more effective advance warning of incoming waves. In the instance of the 2011 Japan tsunami, the warning systems worked fine. Rather it was the unanticipated size of the event that proved so deadly.

That leads us to the biggest problem with tsunamis: Once in motion, they can't be stopped. Scientists and civil agencies can only devote resources to predicting tsunamis and creating effective plans for protecting coastal areas from their ravages.

For more information on tsunamis and related topics, explore the links below.