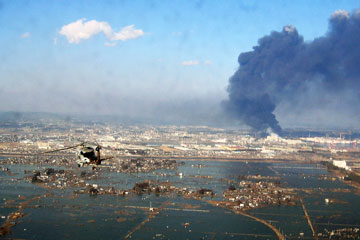 An aerial view of tsunami and earthquake damage off the coast of Northern Japan as seen from a U.S. Navy helicopter on March 12, 2011.
Photo by U.S. Navy via Getty Images

On Dec. 26, 2004, the world's most powerful earthquake in more than 40 years struck deep under the Indian Ocean off the west coast of Sumatra. The massive 9.1 magnitude quake even shook buildings in Bangkok, Thailand 1,242 miles (nearly 2,000 kilometers) from where the earthquake took place. According to the U.S. Geological Survey, the underwater quake hit with the power of 23,000 Hiroshima-type atomic bombs.

A massive and particularly deadly tsunami ensued. One of the factors that made this event particularly destructive was that the tsunamis struck relatively well-populated areas in the middle of the tourist-packed holiday season. The waves slammed into 11 Indian Ocean countries, killing an estimated 220,000 people and displacing millions [source: National Geographic].

On March 11, 2011, a 9.0 earthquake occurred, this time near the east coast of Honshu, Japan. Like the 2004 underwater earthquake, this too unleashed a massive tsunami. The waves completely obliterated such coastal towns as Kuji and Ōfunato and severely damaged much of the infrastructure in eastern Sendai. Within a week of the incident, the death toll had risen to 4,164, with 7,843 reported missing and 2,218 injured [source: CNN].

Tragedy swelled into crisis, however, as the tsunami also destroyed the generators required to circulate water through the nuclear reactor at the Fukushima-Daiichi facility. The reactor shut down with 10 minutes of increased seismic activity, but it still required an operable cooling system to prevent dangerous increases in core temperature from decay heat in the radioactive core.

Water temperature and pressure continued to rise and radiation began to split the water into hydrogen and oxygen. Hydrogen explosions breached the reactor building's steel containment panels. Japanese authorities were now faced with the challenge of cooling the Fukushima-Daiichi and stopping the leak of deadly radiation from the crippled facility.

The ravages of a powerful tsunami can be truly catastrophic. On the next page, we'll learn what can be done to predict their formation.