Nicotine and the Brain 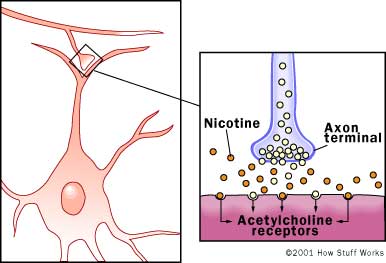 A synapse is the site where two neurons come into contact. The presynaptic neuron releases a neurotransmitter, which binds to receptors on the postsynaptic cell. This allows signals to be transmitted from neuron to neuron in the brain. Acetylcholine is released from one neuron and binds to receptors on adjacent neurons.
© HowStuffWorks

Exposure to nicotine changes the way your brain functions.

Let's imagine your brain as a computer. Like a computer, your brain processes, stores and uses information. In a computer, information travels in the form of electricity moving through wires; information transfer is a binary process, with switches being either on or off. In your brain, neurons are the cells that transfer and integrate information. Each neuron receives input from thousands of other neurons throughout the brain, processes that information and makes any necessary adjustments before communicating the message throughout the body. While signals are conducted through individual neurons as electric current, it's a group of chemical messengers called neurotransmitters that actually relay those messages between neurons and other cells [source: National Institute on Drug Abuse].

Because of all of that unregulated stimulation and disruption, your body increases its release of acetylcholine, leading to heightened activity in cholinergic pathways throughout your brain. Activity in the cholinergic pathways calls your body and brain into action, and you feel re-energized. Stimulating those cholinergic neurons also increases how much dopamine gets released by the limbic system, which activates reward pathways in your brain. When drugs like cocaine or nicotine activate the reward pathways, it reinforces your desire to use them again because it feels good [source: National Institute on Drug Abuse].

Nicotine also stimulates the release of another neurotransmitter, glutamate; glutamate is involved in learning and memory and enhances the connections between sets of neurons. These stronger connections may be the physical basis of what we know as memory, and when you use nicotine, glutamate may create a memory loop of the good feelings you get and further drive the desire to use nicotine.

Nicotine also increases the level of other neurotransmitters and chemicals that modulate how your brain works. For example, your brain makes more endorphins in response to nicotine. Endorphins are small proteins that are often called the body's natural painkiller. It turns out that the chemical structure of endorphins is very similar to that of heavy-duty synthetic painkillers like morphine. Endorphins can lead to feelings of euphoria, and may explain nicotine's psychoactive and rewarding effects.