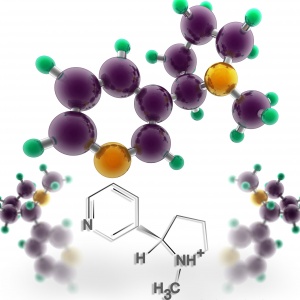 On a molecular level, nicotine is made up of carbon, hydrogen, nitrogen and sometimes oxygen.
© serge001/iStock/Thinkstock

Nicotine is addictive, as addictive as cocaine or heroin (and also difficult to quit) -- even if your body absorbs only a tenth of the amount of nicotine in every cigarette you smoke -- just 1 milligram out of the 10 an average cigarette contains -- it's enough to get you hooked [source: Balfour, MedicineNet]. Most smokers report they want to quit the habit, but without cessation help, more than 85 percent of those who try to stop will start smoking again in about a week [source: National Institute on Drug Abuse].

Trying to quit your nicotine habit may cause physical reactions such as strong cravings for the substance, an increased appetite, insomnia and sleep disturbances, gastrointestinal problems and mood-related complaints including anxiety, anger and frustration, depression, irritability and restlessness [source: MayoClinic].

As the effects of the nicotine already in your system begin to wear off, your body begins to crave it -- and that could happen within just two hours of your last smoke [source: NIH]. To get the same effect from the drug, you need more of it each time, which leads to a pack-a-day habit and dependence [source: Psychology Today].

You don't need to inhale nicotine to become addicted. Smokeless tobacco products are also addictive; an average-sized dip resting between your cheek and lip for about 30 minutes will give you the same nicotine fix as if you smoked three cigarettes [source: BeTobaccoFree.gov].

A combination of counseling to help with the psychosocial part of quitting and nicotine-replacement therapy is considered the most effective method for successfully quitting a nicotine habit, long term [source: Lande]. Psychological counseling focuses on learning how to overcome habits you associate with smoking, such as associating smoking with driving in your car or smoke breaks at work. Nicotine replacement therapy helps ease the physical effects of withdrawal.