What Can Go Wrong With a Nuclear Reactor? 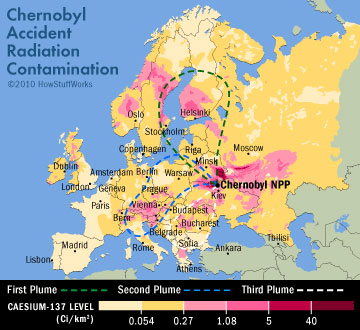 A diagram of radiation contamination after the Chernobyl disaster.
HowStuffWorks

With government regulators looking over their shoulders, engineers have spent a lot of time over the years designing reactors for optimal safety -- not just so they work properly, but so there are backup safety measures in place when something breaks down. As a result, year in and year out, nuclear plants seem pretty safe compared to, say, air travel, which routinely kills anywhere from 500 to 1,100 people annually worldwide [source: Daily Mail].

Nevertheless, nuclear reactors have suffered major breakdowns. On the International Nuclear Event Scale (INES), which rates accidents on an escalating scale of 1 to 7, there have been five accidents since 1957 that rated between 5 and 7 [source: International Atomic Energy Agency].

The worst nightmare is a breakdown of the cooling system, which would allow the fuel to overheat and experience a meltdown. With a meltdown, the fuel turns to liquid and then burns through the containment vessel, spewing radiation far and wide. In 1979, Three Mile Island's Unit 2 came perilously close to this scenario, with the core partially melting down and flowing to the floor of the containment vessel. Fortunately, as scientists later discovered by lowering a camera into the unit, the well-designed containment was strong enough to stop the radiation from getting out [source: Smithsonian].

The Soviets had worse luck. The worst nuclear accident in history was the April 1986 catastrophe at Unit 4 of the Chernobyl nuclear plant in the then-USSR, which was caused by a combination of system breakdowns, design flaws and badly trained personnel. During a routine test, the reactor suddenly surged, and the control rods jammed, preventing an emergency shutdown. The sudden buildup of steam caused two explosions, exposing the reactor's graphite moderator to air and setting it on fire. With nothing to cool them, the reactor's fuel rods then overheated and suffered a full meltdown, in which the fuel turned to liquid form [source: World Nuclear Association]. Thirty plant workers were killed. Unlike the plant at Three Mile Island, Chernobyl's stricken reactor apparently lacked a sturdy containment vessel, and large amounts of radiation spewed out over an area of 125,000 square miles (323,749 square kilometers). The number of deaths caused by radiation-related illnesses is still unclear, but a 2006 World Health Organization study estimated that it may have caused 9,000 cancer deaths [source: World Health Organization].

In the next section, we'll look at how the crisis at the Fukushima Daiichi nuclear plant in Japan compares to past accidents, and how nuclear catastrophes are averted.