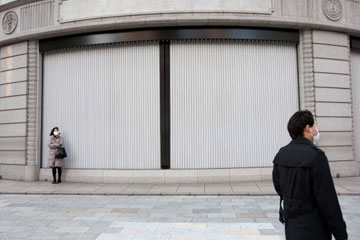 Concerns about radiation exposure swept through Japan and around the world after a March 2011 earthquake and tsunami crippled the Fukushima Daiichi nuclear plant.
Jeremy Sutton-Hibbert/Getty Images

Nuclear reactor designers build safeguards based on a probabilistic assessment, in which they try to balance the potential harm from an event with the likelihood of it actually occurring [source: Nuclear Regulatory Commission]. But some critics say they should be preparing, instead, for the rarest, most unlikely but highest-impact events -- what philosopher Nassim Nicholas Taleb calls "black swan" events [source: Gold].

Case in point: The March 2011 crisis at the Fukushima Daiichi nuclear plant in Japan. The plant reportedly was designed to withstand a major earthquake, but not a disaster as big as the 9.0 quake that sent 46-feet-high (14-meter) tsunami waves crashing over seawalls designed to withstand 18-foot (5.4-meter) waves [source: Swinford, Fisher]. The tsunami onslaught destroyed the diesel backup generators that were in place to power the cooling systems for the plant's six reactors, in the event electricity was cut off. Thus, even after the Fukushima reactors' control rods shut down the fission reactions, the still-hot fuel caused the temperature to rise dangerously inside the stricken reactors [source: Nosowitz].

Japanese officials resorted to an extreme measure: flooding the reactors with massive amounts of seawater laced with boric acid, which might stave off meltdowns, but would destroy the reactor equipment in the process [source: Nosowitz]. Eventually, with the help of fire trucks and U.S. Navy barges, the Japanese were able to pump freshwater into the reactors [source: Nuclearstreet.com]. But by then, the reactor buildings and containments had suffered extensive damage, and monitoring already showed alarming levels of radiation in the surrounding land and water. In one village 25 miles (40.2 kilometers) from the plant, cesium-137, a radioactive element, was measured at levels much higher than the standard the Soviets used as a gauge in recommending abandoning land around Chernobyl, presenting the prospect that the area might become permanently uninhabitable [source: Wald].