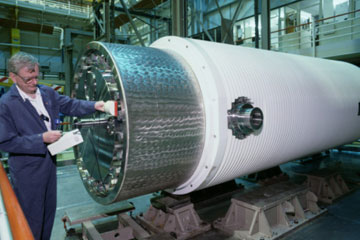 Nuclear power is touted by supporters as "clean" energy because it doesn't put large amounts of greenhouse gases into the atmosphere, the way coal-burning power plants do. But critics point to another environmental problem: disposing of nuclear waste. Some of the waste is spent fuel from reactors, which continues to give off radioactivity. Another waste material that must be stored is high-level radioactive waste (HLW), a liquid residue that's left over when spent fuel is reprocessed to remove and recycle whatever usable uranium remains in it. Right now, most of this waste is stored onsite at nuclear power plants, in pools of water that absorb some of the leftover heat generated by the spent fuel and help to shield workers from radiation exposure [source: Environmental Protection Agency].

One problem with spent nuclear fuel is that it's been changed by the fission process. When big uranium atoms are split, they create byproducts -- radioactive isotopes of several lighter elements, such as cesium-137 and strontium-90, called fission products. They're hot and very radioactive, but eventually, over a 30-year period, they decay into less dangerous forms. That period is called the half-life. Additionally, some uranium atoms also capture neurons and form heavier elements, such as plutonium. These transuranic elements don't generate as much heat or penetrating radiation as fission products, but they take a lot longer to decay. Plutonium-239, for example, has a half-life of 24,000 years [source: Nuclear Regulatory Commission].

This high-level radioactive waste from reactors is dangerous to humans and other life because it can give off a huge, fatal dose of radiation from even a short exposure. A decade after a fuel assembly is removed from a reactor, for example, it gives off 200 times as much radioactivity in an hour as it takes to kill a person. And if the waste gets into groundwater or rivers, it could enter the food chain and endanger large numbers of people [source: Nuclear Regulatory Commission].

Because the waste is so dangerous, many people are uneasy about having 60,000 tons of it sitting at nuclear plants close to major cities. But finding a safe place to store it hasn't been easy. For decades, the U.S. federal government, for example, has been studying the possibility of storing it inside Yucca Mountain in Nevada, 90 miles (144.8 kilometers) outside of Las Vegas. Despite strong local objections, Congress approved the project in 2004. But in 2009, Obama Administration Energy Secretary Steven Chu announced that the plan was being shelved, and that waste will be stored at local plants until the government finds another solution [source: Hebert].

Radioactive waste is what concerns people most about nuclear reactors -- that is, beyond the obvious and more frightening possible scenario: a reactor breakdown that triggers potentially catastrophic consequences. We'll discuss that type of scenario on the next page.