The T-34 Medium Tank had a long and proud history. This Soviet tank was a major factor in repelling the German invasion of the USSR in 1943 and continued to be pressed into service for decades.

Between 1937, when the Soviet Union fielded 20,000 tanks in three classes (close infantry support, breakthrough, and long-range), and 1939-1940, when Soviet tanks showed so poorly in the Winter War with Finland, Joseph Stalin's paranoia led to the exile and execution of virtually every Soviet commander from the rank of colonel on up.

In so doing, he destroyed one of the best-equipped, best-led armored forces belonging to any nation at that time. As a result, in the first six months of Germany's invasion of Russia, the demoralized, undertrained Red Army lost nearly 18,000 tanks.

General Georgi Zhukov had begun to reorganize Soviet armor and training during the 1939-1940 Winter War, but the precious time lost because of Stalin's purges was never made up in quality, only in quantity.

The scales did not begin to tip in favor of the Red Army until the Battle of Kursk in July 1943. The balance then wavered until the harsh winter of 1943-1944 helped impel the Germans on their long retreat to Berlin.

The T-34 medium tank became the added bit of weight on the Soviet side of the scale. Although a very fine tank, it was also the most crudely built, with the least amenities for its crew.

Pound for pound, Germany's Panzerkampfwagen (Pz.Kpfw) V Panther was a better tank, but the T-34 was produced at eight times the Panther's numbers.

The Soviets were forced to fight and win armored battles in the same manner in which they won their infantry and air battles, by attrition. Their Nazi opponents were simply overwhelmed by numbers.

A bond between civilian, factory worker, and front-line soldier developed that proved unbeatable. Proud civic groups would contribute funds to buy a T-34. They then presented the new tank to its crew, who were often brought directly from the front to receive it. This was a part of the T-34's mystique.

The T-34's designer, M.I. Koshkin, began work in 1936 on a new fast tank, which was to be a combination wheeled and tracked vehicle similar to the design of the BT Fast Tank of the early 1930s.

But Koshkin, in a dangerous move given Stalin's paranoid hatred of technicians and soldiers, argued that tank crews hardly ever used the BT in the wheeled mode. He also argued for a tank with rounded and sloped sides to increase the effectiveness of its armor plate.

Two prototypes (A-20 and A-32, later T-32), each with a 45mm main gun, were built and tested in 1939. The Armored Directorate asked for heavier armor and a heavier gun, and Koshkin's staff quickly provided them. The new tank was accepted as the T-34.

While troops assigned to the invasion of Finland were already moving to their jump-off points, the T-34 was ordered into production. The first tanks came rolling off the assembly line in January 1940. After final testing of the production prototypes, full-scale production was ordered in June 1940.

For more on the equipment of the T-34 Medium Tank, continue to the next page.

Think you're an expert on the T-34 Medium Tank? Test your knowledge with this quiz from the American Heroes Channel: 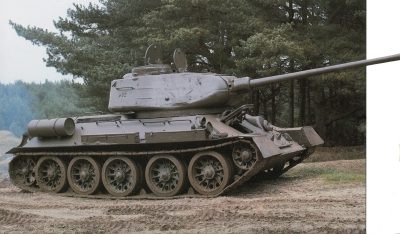 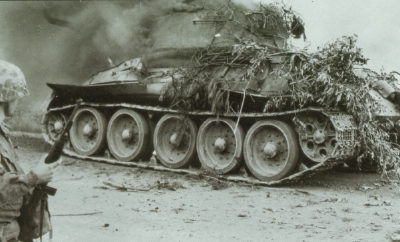 The T-34 was supplied to USSR client forces around the world. An American GI watches a T-34 burn on the road between Inchon and Seoul in South Korea in 1951.
©2007 Publications International, Ltd.

How Controlled Detonations Work
What does an Army combat engineer do?
The Mother of All Bombs Is Big But It's No Nuke