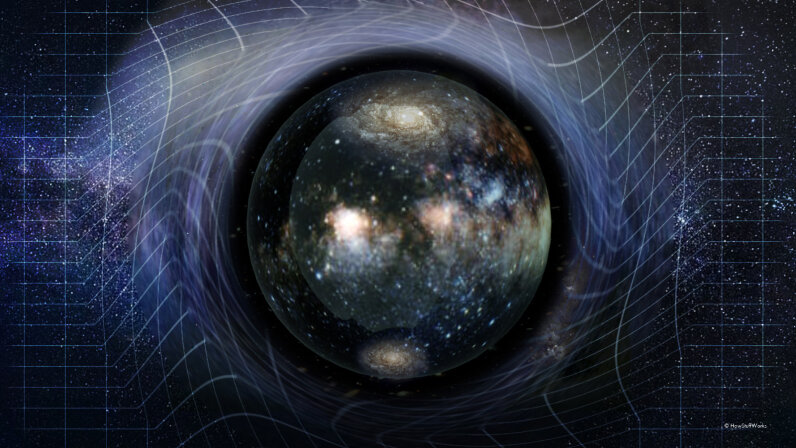 If Planet Nine really is out there, it would be a profound historic discovery that would reshape our understanding of the system of planets that orbit our sun. So, what if it's not a planet at all, but a black hole? Illustration: Jason Koch/HowStuffWorks

There's something big lurking in the frozen hinterlands of our solar system that appears to be tugging at the tiny worlds beyond the orbit of Neptune. The object is assumed to be a hypothetical world called "Planet Nine," which has an extremely far-flung orbit around the sun and causing all kinds of gravitational chaos in the dark. But as the search for Planet Nine wears on, and astronomers have yet to so much as get a glimpse at it, other researchers are pondering what else the object could be. Might it not be a planet at all? Could it be a primordial black hole?

The solar system is a big place and, while our astronomical techniques are rapidly advancing, many tiny worlds in the outer solar system have yet to be found. Planet Nine is thought to be a rather more substantial world, however, with a mass of around five to 10 Earth masses, scooting around the sun at an average distance of 400 to 800 astronomical units, or AUs. Since one AU is the average distance Earth orbits the sun, that's 10-20 times the orbital distance at which Pluto orbits the sun. If it exists, Planet Nine takes between 10,000 and 20,000 years to complete just one orbit!

The possibility of a large world orbiting the sun at such a huge distance is captivating. Studies of other star systems reveal that exoplanets between the masses of Earth and Neptune are relatively common. Why our solar system doesn't contain a world within this mass range is a puzzle, but if Planet Nine really is out there, it would be a profound historic discovery that would reshape our understanding of the system of planets that orbit our sun.

So, why do scientists think this extreme ninth planet is out there? In 2016, planet hunters Konstantin Batygin and Mike Brown of California Institute of Technology (Caltech) announced their discovery of a group of very distant trans-Neptunian objects (TNOs) that were all strangely clustered and moving with similar orbital alignments. Their orbital alignment was weirdly tilted, so it appeared they were all being corralled by the gravitational interactions with a larger planetary body. But no other large planetary body exists in that region, so Batygin and Brown hypothesized that an as-yet-to-be-discovered planet was out there. And so, the hunt began.

Suffice to say, any planet with an orbit this extreme would be very difficult to spot, but astronomers are scouring infrared surveys with hopes of seeing a distant object slowly crawl across the sky. If it's out there, Planet Nine should be emitting infrared radiation – energy leaking from the planet since its formation – but so far, apart from the gravitational effects of something in the outer solar system, precious little direct evidence for Planet Nine's existence exists.

On Sept. 24, astronomers Jakub Scholtz of Durham University and James Unwin of the University of Illinois at Chicago published a new study describing their alternative hypothesis that the gravitational weirdness in the outermost reaches of the solar system isn't being caused by a planet at all. Instead, they pointed to the presence of a primordial black hole, a theory that has caused a bit of a stir.

No, this kind of black hole doesn't pose a danger to the rest of the solar system, as it would simply be too small, but in the distant regions of our solar system, its impact would be significant. The only evidence we have for Planet Nine's existence is the gravitational effects it's having on TNOs, and black holes are the most gravitationally endowed objects in the universe, after all.

Primordial black holes are the most ancient kind of black hole that are hypothesized to have formed right after the Big Bang. Density fluctuations in the early universe would have rapidly formed black holes of all masses. These ancient objects would have been flung throughout the cosmos and, over time, they would have slowly evaporated via Hawking Radiation; smaller ones popping out of existence first.

Artist’s impression of what Planet Nine might look like, if it is a planet, that is.
Caltech/R. Hurt, IPAC

While many theories of cosmic evolution suggest they should exist, we have yet to directly observe a primordial black hole, though some compelling indirect evidence exists. For example, analysis of microlensing events – the transient brightening of stars caused by a massive object passing in front, causing a brief brightening via the curvature of spacetime creating a magnifying lens – suggest that there's a population of small black holes out there with no other visible clues except for their gravitational impact on spacetime.

Scholtz and Unwin took a fresh look at the TNO peculiarities and simulated what would happen if a black hole with a mass of between five and 10 Earth masses had an extreme orbit around the sun. Sure enough, their models suggest that a primordial black hole with a mass within this range would cause similar orbital perturbations in the population of TNOs. This could also explain why little optical or infrared observational evidence for Planet Nine; a primordial black hole would generate neither signal. In fact, if a black hole is nearby, it may also be dragging around a cloud of dark matter that could be annihilating, generating different types of radiation. The researchers therefore suggest, based on their findings that the experimental program needs to be expanded, motivating "dedicated searches for moving sources in x-rays, gamma rays and other high energy cosmic rays," they write in their paper.

While this is an interesting avenue of study, replacing a hypothetical planet with a hypothetical type of black hole may be overcomplicating the mystery of Planet Nine.

"Could a black hole explain the gravitational effects we are seeing in the outer solar system? Absolutely!" Mike Brown says. "All we know is that there is a six Earth mass something out there, and we don't know what the something is."

Brown points out that "a planet" would be the obvious "something," but as long as it has a mass of a few Earths, it could be anything. But the plausibility of it being anything other than a planet is extremely low to say the least. With tongue in cheek, Brown adds: "It might be a six-Earth-mass hamburger. Or a burrito ... but, yes, it also might be a six-Earth-mass black hole. The physics, of course, doesn't care one bit what the six-Earth-masses are made of.

"You could equally well hypothesize that every exoplanet that we only detect via the radial velocity method is a black hole. Is it possible? Yes! Does it make any sense in the universe? No."

While investigating other gravitational sources of what may be messing with TNOs (no matter how improbable they are) is good science, it's more likely that Planet Nine is a planet and not a primordial black hole. Astronomers just have to keep searching and there's a growing consensus that it will be discovered in the not-so-distant future.

Now That's Interesting
The first black hole ever found was Cygnus X-1, discovered during balloon flights in the 1960s, but not identified as a black hole for another several years. According to NASA, it is 10 times more massive than the sun.